People get awfully touchy about death, don’t you think? You’re not really allowed to laugh or make jokes about it and, let’s face it, it’s no laughing matter. My granny used to say “there’s folk dying who’ve never died before” and that was as close to being disrespectful about the departed as we ever got.

But that was usually when someone from the local community passed away. These days, when a celebrity dies, and by celebrity, I mean someone with whom we are all familiar from the world of sport, show-business or politics, it is plastered all over the 24-hour news 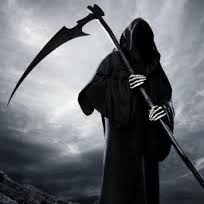 channels until the funeral’s over and done with. And everyone has something to say about it.

Such a sad event always garners some strange reactions, particularly on social media. Lots of people don’t know how to react to it – please note, you don’t have to react, it isn’t compulsory – so they respond with hackneyed and clichéd phrases that they think they have to trot out. For example, is it just me who thinks that “sorry for your loss” is the most unimaginative, lazy remark to make to someone who has just been left behind to mourn a loved-one?

2016 has already seen an awful lot of famous people pass on, many ridiculously early, and people have gone bonkers. If I had a penny for every R, I and P I’ve seen posted on Twitter and Facebook this year I’d be able to afford a really, nice, expensive headstone for when it’s eventually time for me to go.

Is there any need for it all though? I’m all for showing respect, but I was recently bollocked by a so-called friend for not allowing him to grieve David Bowie’s death!. Grieve, though!? Well, I’m sorry, but grieving is what David Bowie’s family gets to do. You don’t get to grieve just because you bought a few of his albums and once painted a blue zig-zag flash on your forehead at high school.

Don’t get me wrong, I’m not completely heartless. Many of these recent deaths have made me go “oooh, that’s a shame” but I haven’t felt the need to take a day off work or send the bereaved family some flowers. Lots of the deaths have had me muttering “who?” and googling them so that I could learn who they actually were and what they actually did to become famous. I’m quite sure many people had a similar “who?” moment too, just like me, but it didn’t stop them posting a cheeky “RIP” alongside a picture they nicked from Getty Images.

Anyway, as I say, I’m not completely made of stone and so, in amongst the “oohs” and the “whos”, there have been some genuine “awwws”; people who have passed who meant quite a bit to me, people, who I grew up watching, listening to or reading about. Here are five of them. RIP.

David Bowie – Yep, as mentioned earlier, I didn’t lose a minutes sleep over it, or shed a single tear, or feel the need to grieve but he was a massive star and a huge loss to the music world.

Johan Cruyff – I ran home from school in 1974 to watch him in the world cup. He was many a teenage boy’s idol from that era. The vast majority of today’s – and yesterday’s – footballers were not fit to lace his boots.

Ronnie Corbett – One of a kind. Much like Cruyff in the football world, many of today’s so-called comedians couldn’t hold a candle to him.

Terry Wogan – Even many of the hip, trendy young Radio 1-type DJs recognise Wogan as the Godfather of radio. Again, one of a kind.

Victoria Wood – in my opinion, she was the funniest, female comedian that this country – or indeed any other – has ever produced. RIP, indeed.

See you in the chapel of rest – Griff