I read that an Australian referee found a novel way of deciding who would kick-off a Boxing Day A-League football match between Sydney and Central Coast. Instead of tossing a coin, which is, of course, the traditional method, he made the two captains pull a Christmas cracker.

Had this been a referee in the English Premier League, 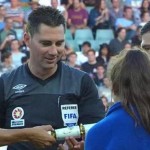 I suspect he would have subsequently been rewarded for his attempt at levity by being demoted to officiate a League One game for New Years’ Day – probably at Wigan Athletic, if they really wanted to punish him.

I can’t help feeling a tad disappointed that the toy inside the cracker wasn’t a little plastic whistle and that the ref didn’t make the captain who lost the “pull” wear the paper hat for the duration of the game. Still, it was an admirable attempt to bring a bit of fun, humour and nonsense into a game that far too often takes itself far too seriously.

In case the referee – his name is Benjamin Williams, for the record – is looking for other ways to toss for ends in future games, here are five potential alternatives.

Can’t see any objection to any of those, can you?