I’ve just started to watch the American TV show Mad Men on Sky’s On Demand service. I’ve seen up to episode four of the first series, so far. I’m sure that doesn’t interest you one tiny bit. It doesn’t particularly excite me either to be honest, because Mad Men, per se, is not the subject of this week’s 5-4-Friday. However, something happened in that episode which had me tumbling back to my childhood years. In the show in question, Don Draper’s underlings are listening to a new recording by the comedian Bob Newhart. Newhart was performing a routine whereby you, the listener, hear one side – his – of a telephone conversation. I didn’t take much notice of the content of the sketch because a) it wasn’t important to the storyline of the episode and b) I was busy reminiscing about another comedian with a similar style to Newhart called Shelley Berman. My Dad had a Shelley Berman album, and I used to listen to it as a kid. It got me thinking about all my Dad’s other stuff that I used to listen to, sometimes through choice, sometimes not quite so voluntarily. The rest of the Mad Men episode completely passed me by as I scribbled down some notes for this blog through the haze of gin and wine. It’s just as well that the whole box-set is still available via On Demand. 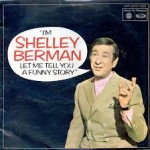 about the afore-mentioned Shelley Berman. For my part, all I recall is that my Dad had a Berman album called Let Me Tell You A Funny Story. It was an album of sketches/monologues in which Berman would more often than not be involved in a telephone conversation, only his end of which you, the listener, heard.  I remember the sketches being quite amusing, though I was only about ten at the time. In a thinly-veiled attempt at professionalism this week, I googled Berman by way of research for this blog and found that he actually accused Bob Newhart of nicking his telephone comedy style. So, at least it was a valid comparison that I was making between the two when I heard Newhart on Mad Men the other night.

Listen – Woman On The Window Ledge

The Goons – If it’s fair to say that my exposure to Shelley Berman was quite fleeting, then the opposite 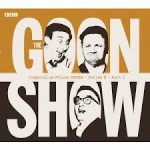 could be said of the Goons, or at least the composite members thereof. My Dad was a massive Goons fan, in particular Spike Milligan, and the house was subjected to a fairly liberal and regular helping of The Goon Show on radio, Michael Bentine’s Potty Time and Q8, Q9, etc on TV and reading what I think was the entire series of Milligan’s World War Two stories. Those Milligan books in particular kept me amused for hours. The man was an absolute lunatic. In fact, whilst you are patiently waiting for mine and Jonny Fairclough’s book of twisted lyrics to hit the shelves later this summer, I suggest you get hold of a copy of Milligan’s Silly Verse For Kids – it’s an excellent book, ideal for use in the “smallest room” of the house, shall we say.

Listen – There’s Someone Knocking At The Door

Guy Mitchell – In recent weeks, I have made reference to my non-too adventurous and fairly eclectic musical tastes in these pages. However, when you know what strange 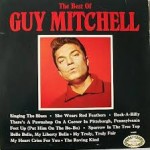 things I used to listen to when I was a young lad, it is hardly surprising that my musical tastes drifted away from the mainstream. For example, I would, for some inexplicable reason, regularly play my Dad’s Mario Lanza and Frankie Laine records. More acceptably, I think, I would also listen endlessly to Johnny Cash’s Live From San Quentin album, he says, trying to restore some semblance of credibility. However, any credits this may earn me are immediately cancelled out by the admission that I often chose to play a Guy Mitchell album, too. To be fair to my Dad, I think it was my Mum’s Guy Mitchell album, not his. Still, that is no excuse for me listening to songs with such ridiculous titles as Knees Up (Pat Him on the Po Po), She Wears Red Feathers and There’s A Pawn Shop On The Corner In Pittsburgh Pennsylvania. Guilty as charged, I really have no idea what I was thinking.

Mike Harding – These days, Mike Harding is a bit of a rambling (the walking type, not the wittering on type) bore with a fairly dull radio show on Radio 2, or some such tedium, playing fairly bland folk music and 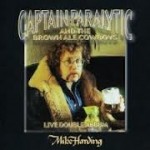 waxing lyrical about wandering the countryside in thick socks and heavy boots. Back in the day, however, he was quite a funny comedian, in his own Mancunian way. He is probably best known for his song, The Rochdale Cowboy, which was clearly a skit on Glen Campbell’s Rhinestone Cowboy, which was out around about the same time. His stand-up routine combined stories of his childhood growing up in Salford and Manchester with both semi-serious folk and comedy songs – a sort of a poor man’s, polite Billy Connolly. He rally was quite good, and I would listen to his albums over and over again. Slight disclaimer #1, here: strictly speaking, it was my Uncle Allan and Auntie Teresa who got me into Mike Harding. Slight disclaimer #2: strictly speaking, they weren’t actually my auntie and uncle.

Frank Sinatra – Under the true definition of this blog, Sinatra doesn’t really qualify at all. For those of you that recall Sesame Street and its regular “one of these things doesn’t belong here” item, Sinatra 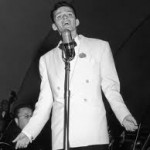 is that odd item out. Why, I hear you ask? Well, because I actually chose to listen/watch/read the other four whereas I was more or less force-fed Sinatra by my Dad. We had the odd brief respite when he was force-feeding us Shirley Bassey, but we pretty much had Sinatra rammed down our throats day in, day out. There has to be something wrong when Bad Bad, Leroy Brown is one of the favourite songs of a thirteen year-old Wigan lad but familiarity clearly bred content. If I recall correctly, my Dad’s favourite Sinatra sing-a-long tracks were My Way (obviously) and Fly Me To The Moon. Dad fancied himself as a bit of a crooner and it is entirely appropriate that the picture of Sinatra on the left is included by way of illustration; my Dad often adopted that exact same pose in the kitchen, usually while Mum was trying to cook or clean – yes, we had a proper house in those days, with all the roles allocated to the appropriate family members. We obviously didn’t have a big radio mic like the one in the photo, so Dad had to make do with the Ewbank stood up in its place. In truth, it was as close as he ever got to doing any housework.

Listen – Fly Me To The Moon

See you on the ice…