When I wrote my first book, I drew on my experiences of sharing a home and a life with a very young boy. Whoa, cool your jets, folks! I am referring to my son, so you can stop looking for the freefone number for the Jimmy Savile Inquiry. The book covered the period of his life from birth to age eighteen months and consisted mainly of stories about stressful times (predominantly me) as well as plenty of tales of spewing, shitting and sobbing (more often than not him but also, to a lesser extent, me).

In the six or seven years since that book was set, I have seen him grow to the ripe old age of eight, going on twenty-eight.  I have to assume that he is not too dissimilar to other eight year old boys and I therefore guess that his behaviour and his likes and dislikes are more or less typical of the age range. So, if you have an eight year old lad, or one who is there or thereabouts, some of the following may well strike a familiar chord. If you have one younger than eight, read on – you have all this joy to come.

Please note that in order to preserve my son’s privacy, I have changed his name.

Lip – before Axle could speak, I longed for the day when we could hold a proper conversation and chat like semi grown-ups.  However, you should be careful what you wish for. He didn’t speak until he was nearly two but 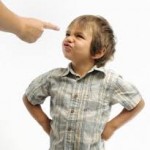 by God, has he made up for it since? With the ability to hold a conversation with your eight year-old son, comes a responsibility to listen as well. I cannot fob him off like I could when he was four by simply uttering the odd random yes or no. The other day, for example, Axle was trying to explain something to me and it was clear to him that I wasn’t paying full attention. Like a seasoned school teacher, he stopped dead in his tracks and asked me to repeat what he had just said. When I inevitably got it wrong, he condescendingly remarked that “the lights are on but there’s no-one in, is there dad?” Lip, you see. Lip is what you get from an eight year-old. As further evidence, he recently asked if I could go in to school with him one day next week as they had been asked to take in something old that doesn’t work for “Show and Tell”. More lip.

Cool, and the fairer sex – I don’t think I could ever claim to having been cool, but in contrast, even at the tender age of eight, the 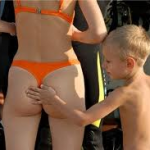 lads in Axle’s class all seem very aware of street cred and the desire not to have the piss taken out of them by their peers. On PE and swimming days, for example, Axle gives an inordinate amount of care to his choice of boxer shorts to ensure that no-one has the opportunity to rip him to bits. Very wise; I have the same approach to Thursday Night Football. Outfits for non-uniform days and school discos are also selected with the utmost care. Not long ago, tongue-in-cheek, I suggested to Axle that this may be a concerted attempt on his part to improve his chances of wooing girls, only to be told quite firmly that he wasn’t interested in girls. I must have looked slightly disappointed, not to mention perturbed, as he immediately qualified this statement by saying that he is interested in girls but would probably wait until high school to look for a girlfriend because then, they are “sexier and more interesting, plus they have boobs and stuff”. There really was no answer to that, and I certainly declined to ask what he meant by ‘stuff’.

Video games – by the age of eight, if your son is anything like mine, he will already be morphing into the stereo-typical 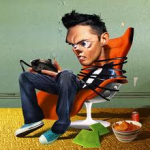 teenager who, if allowed, would spend morning, noon and night playing video games on the DS, X-Box or Wii U. He will have mastered all of the controls and techniques on each of these consoles. Within five minutes of starting a new game he will know its strategies and tactics inside out and be well on his way to beating it even before the astronomical cost of the bloody thing has left your bank account. Now and again he might invite you to a spot of two-player mode, until he realises you are useless at it, reverts back to single-player mode and sends you packing to the laptop to find him some cheats and short-cuts on Google. Despite never really being allowed to play, you will nevertheless be constantly tested on your knowledge of the game and asked which is your most (and least) favourite of the Skylanders, for example, and which of their powers is the most impressive. There is no duller a subject to become embroiled in and, within a short space of time, you will be volunteering to do the ironing or the hoovering just to have some much needed respite from this inane drivel.

Films – if you have any sense, to earn some quality sitting-on-your-arse time on a weekend afternoon, you will spend 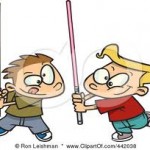 an hour or two wearing out your eight-year old son by getting him to scoot round the park or going for a bike ride or playing football with him in the morning. By the time he is eight, provided you have got him sufficiently knackered, he will then be happy to sit with you and watch a film for an hour or two in return. If you are careful, and with due respect shown to the film classification guidelines, you can wean yourself off Power Rangers and Winnie The Pooh and on to more adult themed films. For example, Axle has recently watched Airplane and Jonny English and even some of the Austin Powers films – though we had to gloss over the explanation of the “Spy Who Shagged Me” bit. His current favourite genre is the Star Wars films and, in this respect, I have two notes of warning for you. First of all, to answer the question of who is your favourite Star Wars character with “Princess Leia” is not deemed cool. At least opt for one of the male characters. Secondly, at least twice a day, you will be challenged to recreate the classic Obi Wan and Anakin fight scene, though only one of you – him – will possess an actual light sabre. When you protest about this, you will be simply told to pretend that you have one or, alternatively, use The Force. Neither of these defence mechanisms will prevent you from having your knuckles rapped black and blue or your rib-cage prodded and poked, no matter how hard you try to summon up any latent Jedi powers you think may lurk deep within your being. The only things more at risk of physical danger than your defenceless body are the living room light fittings.

Music – I have been amazed and quietly impressed at the diversity of Axle’s recent musical tastes. These have developed significantly and rapidly from a few short years ago when we were simply force-fed a diet of the Power 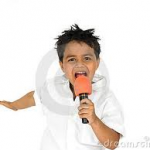 Rangers sound track whenever we ventured out in the car. Now, he has his own iPod and has filled it with a wide and impressive range of different artists, though to be fair, they mainly consist of current songs from the charts that he has picked up from listening to Capital FM. Although he likes many different songs and artists, he will go through a phase of playing his current favourite track in repeat mode, which is akin to some kind of ancient Chinese torture.  Believe me, there are only so many times you can listen to Gangnam Style or Robbie Williams’ Candy without a break. Also, and this is probably a good thing, he holds no truck with my own outdated musical preferences. I don’t actually recall what it was I was singing innocently to myself the other day, but it was halted in its tracks by a withering and pitying look and the request to “stop warbling that rubbish, Dad. It’s not 1986, you know?”