Sat in the freezing cold at Walton Hall Park in Warrington last weekend, I was watching some kids spinning dizzily on a little roundabout and getting quite nauseous at the sight of it. I’m a big fan of fairgrounds and theme parks in general, and particularly the big rides at places like Universal Studios and Busch Gardens in Florida. However, as I am clearly entering my Victor Meldrew phase, these days, there are certain things that are most definitely not “all the fun of the fair” for me.

Stomach churners – What on earth was the fascination with the Waltzer as a teenager?  Obviously, for the girls it  was the 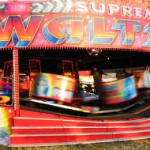 opportunity to get up close and personal with the string-vest wearing pikey running the ride. For the lads though, why did we bother? To prove we could be spun round at high speed without screaming or throwing up?  I really don’t know the reason why but I, along with everyone else, would still rush to queue up to be tossed and turned into oblivion. There’s a ride at Drayton Manor next to the entrance to Thomas Land called Maelstrom. I wouldn’t go on it for a gold pig. Thirty years ago I might have queued up for hours on end for the privilege of being swung upside down and thrown about like a rag-doll, but no longer. And as for those Viking ship type-rides? Er, no thank you.

Soggy trousers – I’ve never really understood the appeal of the Log Flume, either.  Usually the ride consists of a leisurely 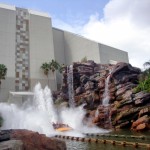 bob around the watery track before ultimately plummeting – and I use the term loosely – nose-first down a very modest slope at which point you would inevitably be soaked to the skin.  It never ceases to amaze me how surprised and shocked people are when this happens.  Surely that is the whole point of the ride? I recently reluctantly agreed to try the new Valhalla ride at Blackpool Pleasure Beach, but only once I had established that you could buy a nice plastic poncho under which to keep dry and then finish off any residual wet patches in the walk-in drying machines at the end of the ride. The last time we went to Florida we changed into beach gear prior to exploring the wet ride section of Universal Studios, including the magnificent Jurassic Park ride, and changed back into normal clothes once the hot sun had dried us off. Boring and organised it may well have been, but I wasn’t in the Scouts as a kid for nothing.

Roll up, roll up! – Sports in fairgrounds should be left to the kids. As you grow older, the bitterness and disappointment 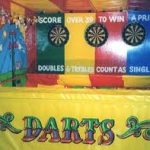 you feel from not having carved out a career as a professional sportsman of some kind will overwhelm and constrain you as you step up to the plate to try your luck. Be it football, basketball or darts, you will put yourself under ridiculous pressure to succeed but everything will conspire against you. As well as your nerves and skill betraying you, the equipment and playing conditions will give you little chance of success. The footballs are flat, you were never that good at basketball anyway, and as for the darts – well, you may as well fling a paper aeroplane at the board for what little chance you have of getting them to stick in the board and posting a reasonable score.

Everyone’s a winner! – If we accept that the dice are loaded against you when playing the games of skill, then we should 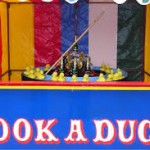 consider carefully the far too good to be true offer of “a prize every time” stalls.  How can this be, because clearly the fairground operators will not be losing money? And the prize itself costs some money. There is a little local fairground that appears in Ashton two or three times per year and it has a stall that offers you the chance to hook a stationary duck with a bamboo stick. Unless you have no motor skills whatsoever it is impossible to fail hook the duck and therefore win a prize. Agog with anticipation, your kid will eye up the range of cuddly toys suspended from the top of the stall only to be told by the operator that they can choose anything from the bottom shelf only. Any one of those items can be purchased for 50p from any old tat shop or market stall, many of which can be found in Ashton itself. The cost for having a go at hooking the duck and winning a 50p prize is £2.50. That’s some mark up in anyone’s book.

Death traps – I am a fully paid up member of the “it will never happen to me” club. It is why I have no fear of flying 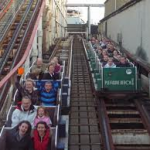 and also why, whenever I travelled to far-flung countries across the globe with work, I would venture unperturbed into areas of their towns and cities that visitors were urged to avoid at all costs. Rightly or wrongly, I have always considered myself to be bomb-proof.  However, as I have aged (note the absence of the word matured) I have become a little more circumspect and don’t believe in pushing my luck. As such, when visiting Blackpool Pleasure Beach, I have a policy of avoiding any ride that was already in situ when I was at school and is, predominantly, a wooden structure. I am quite happy to go on the Big One and the Revolution, but I have had my last ever ride on the Big Dipper, The Wild Mouse and The Grand National. In fact, I would rather have a go at the real Grand National at Aintree than risk life and limb on that rickety old roller-coaster in Blackpool.