Hull City supporters have been arguing for with their chairman over his desire to change the club’s name from Hull City to Hull Tigers. He wants to do this because he thinks it will enhance the club’s commercial 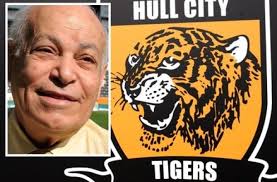 opportunities, particularly in the Far Eastern markets. Nobody, other than the chairman himself, thinks that this will make any difference at all. It will take more than dressing up in an orange and black striped kit and calling yourself ‘Tigers’ to make Hull City a big draw in the Far East.  Let’s face it, they’re only popular in the far east of the old county of Yorkshire because there’s nothing else to do within fifty miles in either direction.

Generally, therefore, anyone with a modicum of intelligence and grasp of football’s traditions believes that the expected imminent decision of the FA to reject this proposal is the correct one. Hull City is Hull City and it always will be. After all, this isn’t rugby league, whereby the game’s authorities binned decades of tradition and renamed its member clubs after a veritable menagerie of animals in exchange for a few quid from Sky twenty-odd years ago. Ironically, as it happens, the rugby league clubs of Hull were two of the few that weren’t forced to add an animal – or other stupid appendage – to their name as a result of that exercise.

That said, there has long been an association between football clubs and animals. For example, Blackburn have recently become inextricably linked with 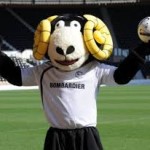 chickens due to the association with their poultry farming owners and Bolton, of course, have long been associated with donkeys, thanks to a long-line of ponderous and incompetent defenders.

However, most football team and animal links that do exist are to be found in the club nickname. Leicester City is known as the Foxes, Derby as the Rams and Norwich as the Canaries, for example.  So if, hypothetically, the FA was to take the Sky shilling (well, take more Sky shillings than they already do) and insist that football teams adopt an animal-themed name, some of our clubs are already half-way there. Because, it wouldn’t be a big stretch to come up with Leicester Foxes, Derby Rams and Norwich Canaries would it, as they almost pick themselves?

For other teams, not normally associated with an animal of some sort, it isn’t quite so easy to see a way forward.  As such, last Tuesday evening, the Brickmaker’s Arms Pre-Wigan Athletic Match Brains Trust convened prior to the game with Yeovil and gave the matter a little bit of thought. We didn’t attempt to come up with something for all ninety-two professional league clubs; we stuck to just five, of course.

Wigan Whippets – where else to start but with Wigan? With a cursory nod to the stereotypical image of the Wiganer as a simple northern, flat-cap wearing peasant, thoughts readily turned to pigeon fancying, greyhound racing and ferret bothering.  However, ‘whippets’ trips off the tongue much more easily.

Bolton Boars – You need to think about it. Got it? Some might see this as harsh and I guess it was easy to tag this moniker to our nearest and dearest rivals from up the road in Horwich. It is undoubtedly interchangeable and can be nicked and applied to your own club’s rivals. However, attached to the tedious Trotters, you have to admit that Bolton Boars does have a certain ring to it.

Manchester City Cheetahs – This is another interchangeable one that you could pick up and apply to your own team’s rivals. I have plumped for Manchester City simply because in the old days – you know, the days when they weren’t billionaires and we didn’t regularly beat them in the latter stages of the world’s oldest and most famous cup competition – they used to resort to cheating against little Wigan. The most notable one was when they knocked us out of a play-off semi-final thanks to a blatant hand-ball ‘goal’ from Shaun Goater. Oh, there’s a thought… what about Man City Goats?

Scunthorpe Beavers – The first three in this list were thought up pre-game but, by the time we arrived back in the Brickmaker’s, a combination of several beers and the giddiness that came with seeing five goals scored in a crazy last ten minutes, we were bordering on the infantile.  With a childish determination to get ‘beaver’ in here somewhere, I opted for Scunthorpe on the basis that it offered not one but two smutty references to the female genitalia. I have to confess that this isn’t my proudest 54F moment.

Creepy Crawleys – By now, I was really scraping the barrel. But, as it happens, I’m actually quite pleased with Creepy Crawlies! Well, it tickled me, anyway.

See you at the zoo – Griff