The 2013 version of the world’s greatest golf championship has started at Muirfield in Edinburgh. It is one of my favourite television weeks of the sporting year. However, the chances of me watching The Open from the minute the first drive is struck on Thursday morning until the final putt is sunk on Sunday evening, as I used to before Alex came along around 8 Opens ago, are slim to nil. I would imagine that the thought of watching golf on television for four days solid fills most people with horror but it can, and often does, make for riveting viewing. On the other hand, if you are struggling to sleep, then the dulcet tones of the incomparable Peter Alliss are guaranteed to have you dozing off in no time.

That said, watching golf on the box is definitely no substitute for the real thing. Whoever it was that said that “golf is just a good walk spoiled” (and it wasn’t Mark Twain, before you all leap in) was talking out of his mashie niblick. At all levels of the game, golf is a true test of technical, physical and mental strength yet at the same time can be relaxing, therapeutic and, depending on the company you keep, downright hilarious. To coincide with this week’s Open, I had planned a “5 Favourite Golfers” blog. But, how boring would that be? Instead, I will share five hopefully amusing, and printable, stories from my thirty-odd years of digging up golf courses. Some of the names and locations have been removed or amended to protect the not-so-innocent and to guard against them caving in my head.

The fact that this year’s Open is being played at the Muirfield, a golf club with a strictly men-only membership policy, has kicked up a bit of furore in these days of gender equality and inclusivity. 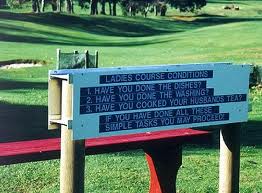 Modern day golf clubs no longer discriminate against women in this way and, in fact, many even have specific times of the week when men are not allowed to play at all – although there are far more instances where the opposite applies, of course. There should really be no need to have any such favouritism for either sex but, back in the day, this kind of division was the norm rather than the exception. In the mid-Nineties, I was a member of a club in South Manchester that had a balcony attached to the clubhouse bar that over-looked the eighteenth green. On nice summer evenings, that bar and balcony could get a little bit raucous. As such, some lady members complained of being subjected to undue noise and occasional coarse language as they attempted to putt out on the final hole, particularly on Fridays. The committee duly deliberated the matter and, in a shocking display of sexism, responded by decreeing that ladies must complete their games by 8pm in order to avoid the potential for them being offended by uproarious banter emanating from the clubhouse balcony. Well, at least they couldn’t argue that the problem hadn’t been solved, could they?

One of the ironies of golf is that, despite the undoubted snobbery that exists off the course and in the 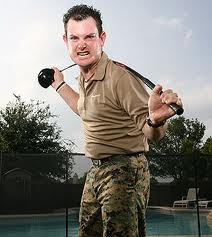 clubhouse, players of all abilities are tolerated out on the fairways and greens without question. This is primarily because no matter how much of a duffer the guy in front might be, every golfer knows that he/she was once in that position and are only a couple of shanked nine-irons from being back there again. I could probably count on one hand the number of times I have witnessed someone genuinely being laughed at for playing a bad shot or missing a short putt. Some years ago, a colleague and I – both respectable 16-handicappers at the time – were playing a round of golf with two other co-workers, both of whom were relative novices. By the time we were half way up the fourth hole, one of the guys in particular was having a torrid time and hadn’t managed to hit a ball more than twenty yards. As he finally hacked his way out of the rough, I shouted across an encouraging “Come on, not bad!” from my safe haven in the centre of the fairway. To say I was taken aback when he responded by screaming venomously at me, “F*** you, you ugly bald ba****d!” is something of an understatement. He was normally a very even-tempered individual, which just goes to show what golf can do to you. When he eventually reached the green, I pulled him up about it saying he was a bit out of order, he was unrepentant. Until, that is, we established that although I had said “Come on, not bad”,what he had actually heard was “Come on, knob-head”. In the circumstances, we all agreed that his reaction had been perfectly reasonable.

Later on in that very same round, the other novice in the group gave us one of those moments that 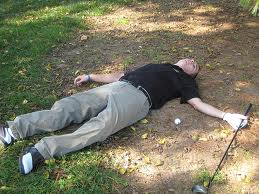 have people saying “get lost, you’ve made that up” but I swear it is one hundred per cent true. The fifteenth hole – or it may be have been the sixteenth, I can never remember which – has a teeing ground that is surrounded tightly on three sides (to the rear, left and right, obviously) by a dense copse of fairly hefty trees. I suspect that it was even more densely populated before the golf club came along and hacked down the majority of the woods to build the course, but you can picture the scene. Our novice golfer teed up his ball and launched a horribly miscued, but well-struck, drive directly off the toe of the club which propelled the ball into the trees at a right angle about ten feet to his right. As a seasoned golfer, I instinctively turned my head away slightly, shielding my face with my arm, knowing from bitter experience that a golf ball hit at that speed towards trees in such close proximity could ricochet anywhere. The novice had no such experience and simply leant forward, peering into the trees in a futile attempt to track the course of his ball. What happened next would have looked far-fetched in a Tom and Jerry cartoon. There were three, maybe even four, loud clunks as the ball squarely struck tree after tree before emerging on the exact line it had entered the trees, at almost the same speed at which it had entered the trees, and hit our poor suspecting novice plumb in his Penfold Aces, so to speak. I swear on my son’s life, it is true, exactly as I tell it. It has to be, you simply couldn’t make it up.

Other than getting in the way of wild, stray and unpredictably rebounding tee shots, golf is normally a 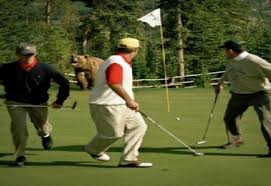 fairly sedate sport. If you keep your wits about you there is very little in the way of physical danger. That said, I can recall one particular incident that is the exception that goes some way to proving the rule. One teenage summer’s day, my mate, Andy Charleston, and I were playing the fourth hole at Great Lever and Farnworth golf club. I had driven down the right hand-side of the hole – perfectly safe, but flirting with the out of bounds. Andy had driven much further right and his shiny new ball was now sitting in the middle of a farmer’s field, well out of bounds. As his second tee shot landed towards the far left-hand side of the fairway, it was left to me to try to locate his original ball from the piles of hay in the farmer’s field. I arrived at the fence roughly at the point where his ball entered the field and gone out of bounds, gingerly negotiated the barbed-wire fence and began the search. I thought I had a pretty good line on its whereabouts but it visible where I roughly expected it to be. I turned round to look across the fairway to Andy for advice but he still seemed to be indicating that the ball was somewhere behind me. I knew it hadn’t gone that far into the field and was simply looking for some guidance as to whether I was too far up the field or not far enough along. Andy continued to gesture frantically behind me, eventually, in true pantomime fashion, yelling the words “Behind you!” I was still unconvinced but nevertheless turned round to look and was met by the sight, not twenty yards away from me, of the biggest, angriest bull I had ever seen charging towards me. To be fair, it was the only bull I had ever seen at close quarters charging towards me, but there was no doubt that it was big and very angry. I’m not sure that wearing a red polo shirt helped matters, but I covered the ten yards or so left between me and the sanctuary of the semi-rough and dove full length over the barbed wire fence in the nick of time before the bull reached me. Andy was still laughing when we were playing the tenth, almost an hour later. Even then, I was still shaking, which did absolutely nothing for my already fragile putting stroke.

And finally, my favourite personal golf story of all time, which sums up perfectly just how daft golfers can be. 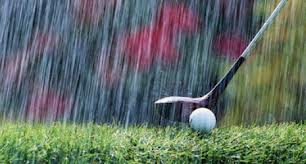 We were due to play in a club medal one Saturday afternoon but, this being an English summer, it had been lashing down all the previous night and all that morning. A group of us had turned up at the club, more in hope than expectation, and were huddled under the clubhouse verandah, grimly watching the rain bounce down on the already half-submerged practice putting green. The prospects of play were extremely slim but, ever the optimists, we hung around hoping against hope that some meteorological miracle would occur to dry out the course. As we stood there, one of the club’s old stalwarts – I think his name was Bob – pulled into the car park. He loved his golf and would have been distraught at the possibility of no Saturday afternoon round, a point that was remarked upon by more than one of those gathered under the verandah. We watched Bob get out of his car and expected him to wander over to us for an update on the current situation. Incredibly, he didn’t. Instead, he donned his waterproof suit, strapped his golf bag to his trolley, deployed his umbrella and casually walked over to the clubhouse. He surely couldn’t believe that there was even the remotest chance that we would actually be playing golf today? He approached us with a cheery “Afternoon!” before ruefully looking up at the heavens and uttering the immortal line: “Can you believe it? The wife wanted to go shopping in this weather!”