Just when you are running out of topical topics for your 5-4-Friday blog, how lucky is it that a chance phone call to Wrightington hospital results in a sooner-than-expected date to be admitted to get your troublesome elbow sorted (hopefully) once and for all? I’ve never been hospitalised due to a real actual illness, but I do have a history of infirmary stays resulting from ridiculously clumsy acts or dramatic sporting injuries.  And so, on Friday of this week, the poor unsuspecting outpatient population of Wrightington hospital will once again have the dubious honour of seeing my hairy, sorry arse hanging out of the back of a gaping surgical gown.

Bucket seat swinger – When I was about seven, me and my sister used to regularly play in a neighbour’s garden.

They had kids that were friends of ours; we didn’t just go round and play in their garden uninvited. Sadly, one of the kids spent most of her time in a wheelchair and the family had a specially adapted swing installed in the garden. In actual fact, the only difference between this and a normal swing was that it had a back rest.  For some unknown reason, this made me think that I could use the swing without holding on to its supporting chains. It therefore surprised no-one but me that when I let go of the swing on its upward cycle, I promptly slid out of the back and landed skull-first on the concrete platform below. It resulted in my first ever trip to A&E. I had concussion and six stitches in a split head that would go some way to explaining a subsequent lifetime of stupidity.

Ball dropping or name dropping? – I could tell you about the time I had to go to hospital because my balls had enlarged to the size of 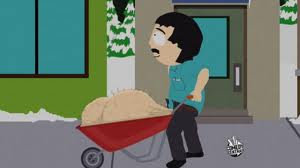 small melons or I could name drop the time I took a famous rugby league player to Wigan Infirmary. Er, no… there’s not a chance you’re getting the first story. So, during a “friendly” game of rugby at sixth form college, Joe Lydon, a future Great Britain international and occasional sex-pest, took an accidental, but very nasty, kick in the mush. I drove him to the infirmary where, through a lip that was split in a number of places and pouring with blood, Joe tried to give his personal details to the nurse, whilst simultaneously coming to terms with the painful loss of at least one tooth. Struggling to make himself understood through his newly acquired Elephant Man-like features, he had to repeat his name, address and date of birth a few times. Eventually, the nurse got the details and asked what was wrong with him. Incredulous that it didn’t seem patently obvious, given the amount of blood that was dripping from his gob, Joe sarcastically told her that he had sprained his ankle. Without batting an eyelid, the nurse replied: “You’ve cut your lip quite badly too, we’d better get that looked at while we’re at it”. 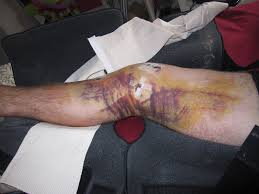 When I was twenty-four, I had a proper footballer’s injury and was admitted to Wrightington one Friday morning in April 1989 for keyhole surgery on my knee. Slightly nervous already, I was even more perturbed when the surgeon arrived and apologised for being late, explaining that he had been to the pub for lunch to celebrate a colleague’s birthday. Still, it seemed to go well, and I was sent home to rest up for the weekend. I had every intention of doing that until someone offered me a ticket for the Everton v Norwich FA cup semi-final on the Saturday. Instead of resting up, I bundled myself in the back of a Ford Fiesta 1.1 and set off down the M6 to Villa Park to stand on a packed Holte End terrace for two hours. There was always Sunday to take it easy and rest up, but Wigan were playing at Widnes in a championship decider and so I limped along to that as well. Funnily enough, I took the Monday off as my leg wasn’t feeling quite as well as it should have been after two days of complete rest.

Chip off the old block – At the age of thirty, playing football for GUS in Ardwick, I jumped up for a header and landed in a 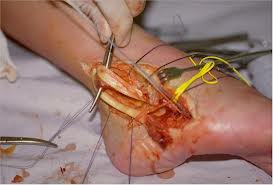 pot-hole with all my weight on my right ankle. It caused a spur of bone on my ankle to be dislodged which, whenever my foot was extended to kick a football, dug deep into the ligament causing severe inflammation. I eventually went to see a consultant in Stockport who became unbelievably giddy about my condition as he reckoned he had studied it at medical school but had never actually seen one in real life. I wasn’t anywhere near as excited as he was, until he said he could operate the following Thursday, slice off the offending lump and sort it out once and for all. Private healthcare – you just can’t beat it. Again, post-operation, I was told to take it easy but I was due to go to a wedding in Inverness on the Saturday. Thirteen hours on a coach didn’t help, but I sensibly took things easy during the wedding reception until the copious amount of pints of heavy and red wine kicked in and I ended up highland-reeling myself into oblivion. The thirteen hour return trip back home, complete with a throbbing, post-op ankle and the mother of all hangovers, felt like a fortnight.

Cough and drop – You can’t call yourself a proper footballer until you’ve had a hernia operation. Even better, if you have a 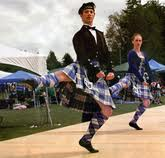 double hernia operation like I did. The consultant was memorable for a number of things. First off, if he told me once that he had treated Roy Keane that week, he must have told me a dozen times. And I think I’m a name-dropper? Secondly, when he found out that I worked in IT, he asked me if he should consider upgrading his PC to Windows 95. I said if he was willing to split the £95 per hour fee he was charging me I’d give him some advice, otherwise he should get on with the business of fixing my groin. Thirdly, whilst explaining the process of the operation he told me that he would be shaving my “whiskers”, presumably under the impression that a 32-year old Wiganer hadn’t come across the phrase “pubic hair” before – in a manner of speaking. He also told me that he would be closing me up after the operation using metal staples rather than traditional stitches, as they would leave a much cleaner scar. This was bollocks. What he meant to say was that the nurse can remove them much more easily and with the speed of a cartoon cat filleting a fish, whilst inflicting the maximum amount of pain to the staplee.  It still makes me wince, all these years later.