Every now and then, in the interests of balance, ying and yang, black and white or good versus evil, I might follow up a particular 54F with a subject that is directly contradictory to the original piece. Or at least offers a mildly alternative view.

Last week, for example, I listed five people who seem to be universally unpopular for whom I personally don’t hold a particular dislike. So, to redress that balance, this week I am discussing five “celebrities” who may (or actually may not) be popular with others, but I simply cannot abide. They are people who I would physically cross the street to avoid, unless there was a better than even opportunity to punch them squarely in the chops.

I can feel my temperature rising already, so let’s crack on… 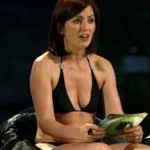 what a talentless, annoying bint she is. It seems to me that her only visible skills are the ability to jabber on relentlessly, to shriek hyper-excitedly into a microphone and to swish her ridiculously sponsored hair about. She has been blessed with the wondrous ability to read an autocue – well done you, Davina – mainly on the reality TW show, Big Brother, which says it all really. Anyone who whose career becomes synonymous with that turgid programme should be afforded no credit whatsoever. A quick visit to Google and Wiki shows that she also hosts a TV game show called Million Dollar Drop. If I had a million dollars to spare I would gladly donate it to see her dropped from a very great height. 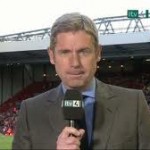 Matt Smith – It takes some doing to be the smarmiest football presenter on TV but this guy manages it with aplomb. He is cheesier than any of the plethora of assembly line presenters that work for Sky Sports but, to be fair, most of them are acceptable.  He is infinitely more annoying than that useless lump of lard Adrian Chiles, far more condescending even than that orange-faced buffoon Gary Lineker and yet he lords it about like this despite only getting to appear on the highlights show on the odd occasion that ITV has the rights to broadcast an FA Cup weekend. He appears to be terminally fond of the use of the gratuitous alliteration, the cheeky sideways glance into the camera and, mainly, of talking absolute shite. 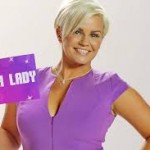 Kerry Katona – I canvassed opinion via Facebook before deciding on my five for this week and Katie Price/Jordan was a name that cropped up amongst both mine and my FB friends’ nominations.  She is undoubtedly a leading contender for the dictionary definition of dirty, blonde, pointless, slapper (though I do admit that, by definition, four individual words cannot be deemed to be one single word) but I think she is just about pipped to the title by Kerry Katona. That poor excuse for both an ‘artist’ and mother is also a walking – well, more aptly, staggering – advert for the folly of this county’s insolvency laws.  I understand that she was considering moving to Standish, in Wigan, recently. Well, good, if that actually came off. They deserve one another.

Ronnie Irani – according to my brief research via Google, Irani can’t make his mind up if he’s from Leigh or Bolton – and to be fair, who can blame him for that?  He was a fairly ordinary cricketer in the grand scheme of things, and then went on to become an even more ordinary radio presenter on Talksport. Whilst “hosting” that show, he was single-handedly responsible for me screaming in pain and anger at the radio every single morning as I drove from home to Hindley station.  Not only did he manage to demonstrate a complete lack of knowledge of all things sport, at the same time he had an infuriating habit of interrupting those who had been invited on to the show to do just that. He also clearly still couldn’t remember his northern roots, given that his pronunciation of certain words seemed to go a bit south from time to time. For example, that country across the channel from us is apparently Fraarnce, and he drinks wine from a glaarse whilst leaving absolutely nothing to chaarnce.  A total tool. Ended up getting sacked . Go figure? 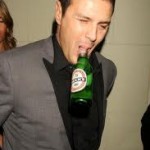 Paddy McGuinness – History, and this seems to be no less prevalent today, is littered with comedians who are simply not funny. There are also a great number of comedians who have managed to steal their living due to a personal association with someone who has made an honest living by being much funnier than them. Not many, however, have managed to complete an ignoble hat-trick, namely hailing from the town of Bolton, too. Peter Kay (who many consider to be a one-trick pony, though I disagree) has been responsible for spawning two such cretins. The toe-curlingly unfunny and cringingly-named Dave Spikey is one of them, but even he is outdone by that prize-wanker, Paddy McGuinness.  I have yet to hear McGuinness utter anything remotely amusing that wasn’t penned by Kay. And, as famous comedy catchprases go, “Ding Dang Do” leaves me absolutely speechless. Yes, that’s  me – declaring myself speechless. So, there you go McGuinness, you utter whopper, at least you will have pleased a few people.