Renowned writers like Jules Verne and HG Wells told classic tales of intrepid time travel and adventure that have stood the test of time. I am quite sure that, despite their vivid and creative imaginations, they never expected their fictional yearns to actually come to fruition.

However, this week’s media is full of stories about Mars One, the ambitious mission to colonise the Red Planet. And this is no pipe dream. 200,000 people have applied to go to live there and 100 people – two of each type – have already been shortlisted. Not that this is a trip for the faint-hearted; there’s an 8-year training course, an 8-month space trip to get there and a good prospect of never coming back. That’s no biggy though, I’ve known people move to Yorkshire and never come back from there, either.

But, I think it would definitely be an under-statement to describe this as the trip of a lifetime. There probably would be, quite literally, no going back once you have crossed over the airlock threshold. And then you’d be goosed, wouldn’t you? We’ve all stood in the check-in line at an airport and tried to assess what kind of 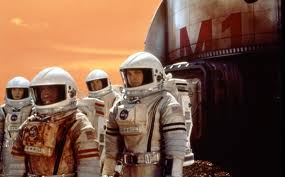 personalities you are going to be stuck with for your two-hour flight to Malaga. Imagine being stuck with them for an 8 month flight? And then, like, for ever and ever, after that?

And it’s not exactly a random cross-section of society that has been offered places, either. It’s unlikely there’ll be a bevy of fit, busty, loose-drawered blondes to ogle at, or fraternise and procreate with for the rest of eternity. That would be far too easy. No, as far as I can see, everybody on the short list seems to have a PhD in quantum physics or something equally dull, so I don’t see it being one long orgy of sex, booze and mirth. It will be like being stuck on an IT Department away day for the rest of your life.

So, even if they wanted me to go to Mars, they can bugger off. I’ m not going. I do have some people I’d like to put forward to go in my stead, though.

BBC weather presenters – I’m talking specifically about those useless herberts on BBC North West. There’s the Rusty Lee look-a-like who thinks that Carlisle is in Combria, then that lanky bloke who looks like he’s dressed for a snooker tournament and that spindly, bag of bones, Mel Coles. I’ve got drinking straws in the kitchen that are thicker than her arms. Note, I am talking about the BBC North West presenters only; if Carol Kirkwood was going to Mars, I’d be two steps behind her, carrying her bags.

Griff Rhys-Jones – When he was with Mel Smith in Not The Nine O’Clock News he was pretty funny. Now, they wheel him out to do Denis Norden’s old job on It’ll Be Alright On The Night and, if anything, 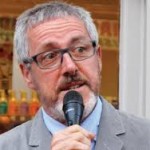 he’s even more annoying than Norden himself.  He could be packed off to Mars and he and his ridiculous grin and cackling laugh wouldn’t be missed one little bit. In fact, they could use him and his bloody clipboard to check that all the passengers are safely accounted for, on board and strapped in place. The pompous little twerp would love that.

M60 Corsa driver – Not all of them, just one particular red Corsa driver. I have no idea who this woman is, I just know that, no matter how I varied my leaving for work time by the time I got to the M60/East Lancs junction she was always there, in my way, driving far too slowly, totally oblivious to what was going on around her.  In fact, thinking about it, for safety reasons, she probably shouldn’t be allowed to go. Even in the vast expanse of outer space, she’d more than likely cause some major traffic incident.

Ed Milliband – To be honest, you could ship all politicians out there and we’d be no worse off. We’d probably be much better off, as it happens.  And 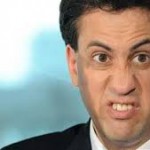 I’m not making any kind of political statement by singling out little ol’ Ed. It’s a toss-up between him and Ed Balls, though that idiot Clegg and smarmy Dave could easily have got the seat in front of him. Ed just looks gormless, acts gormless and speaks with a complete lack of gorm, too.  There are simply too many clues out there for him not to be officially and certifiably gormless. I’d vote for him to go, no danger.

Paddy McGuinness – Could this pointless pillock possibly have anything else stacked up against him? He’s a comedian who isn’t remotely funny, who has a career only because his best mate was funny once and he comes from Bolton. The lad should be put out of his misery, for his own good. And if that could be deemed to be a little bit Bolton-ist, then I’ll relent a little. So Dave Spikey can go in his place. Oh, hang on… he’s a pointless, unfunny Bolton no-mark, too. Ah, sod it, let them both go. Our “loss” would simply be Mars’ gain.

See you on the launch pad – Griff