I was on LinkedIn the other night, stalking people. This is, of course, what all normal people resort to doing once they have become bored with stalking people on Facebook.

For those who are familiar with LinkedIn, I made the fatal mistake of clicking on that “People You May Know” button. Very dangerous, because they offer you a list of around three million people to scroll through and you daren’t risk bombing out half way through in case they slip in someone you haven’t seen before.

And, as it happens, they did. It was a girl I haven’t worked with since my very early days in the Rat Race back at GUS in Ardwick in Manchester. I spent a good twenty minutes reminiscing. Not about her, specifically, but about those halcyon days when work was actually fun and much less pressured than it seems to be today. Or maybe it just seemed it because we were much, much younger, with less – OK then, no – responsibilities.

Either way, things were certainly different back in the day.  Here are a few things that immediately sprung to mind.

Smoke screens – The young lads and lasses that work in your, probably completely, open-plan office would not recognise the office spaces we worked in back in the late eighties and nineties. At GUS, part of the offices were traditional enclosed, glass-walled rooms while some floors were semi-open planned with separate areas created by free-standing fabric backed partition screens. Never really saw the point in these as they offered no privacy whatsoever. Everybody could hear everything that went on and everybody over five feet tall could see everything, too. It did give you somewhere to 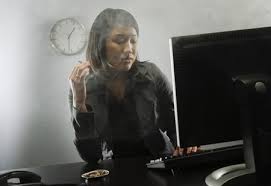 pin up your Page 3 girl from The Sun or the forthcoming weekend’s football coupon.

Smoker’s corner – There will also have been plenty of young ‘uns huddled in the designated smoking area outside your office today that will be totally unaware that you used to be able to smoke at your desk. There were times when I was at GUS in the early nineties when it was like working in a constant fog, and that was nothing to do with the next item…

… Smokey boozers – Not particularly proud of this but, then again, not too ashamed either. But at GUS, and later when I moved into the shipping industry in Liverpool, lunchtime drinking was a fairly accepted pastime. Three pints in an hour, every day of the week, 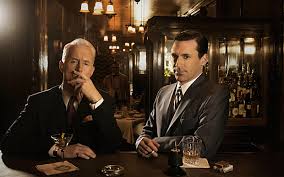 became fairly normal behaviour. You couldn’t have more than three pints, though otherwise you wouldn’t feel like going back for another couple at 5 o’clock. What great, totally irresponsible, days they were.

Smoke signals – When we did find time to actually do some work, things were very different to what they are today. There were no wi-fi networks, no laptops, no tablets or mobile phones. Everyone had a computer the size of a small fridge on their desks and shared data by handing floppy disks around the office. Email was a barely reliable technology and every office had a fax or telex room. And if you couldn’t remember the details of the person you wanted to contact, everybody had a Rolodex full of business cards to hand. Or your secretary did, because anybody who was anybody had a secretary in the nineties.

Smokey bacon – The boozy lunchtimes and evenings meant there was always a constant need for bacon and sausage butties. Be it for breakfast to soak up the previous night’s ale, or for an early lunch to soak up the forthcoming dinner-time session. Either way, Liverpool city centre in the mid-nineties was definitely not the place to be a pig.  Almost every other building seemed to be a pig butty shop. The other building, of course, was a pub.

See you in a smoking jacket  – Griff