The Winter Olympics has just finished, with its collection of wintry and bizarre sports, and it got me thinking about what constitutes a sport. There were people sliding down a hill on a tea tray, people not sliding down a hill at all, but walking very quickly on skis through the snow-covered forests and, of course, there was 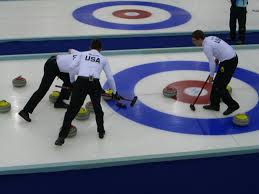 curling. Quite how hurling a rock along the floor whilst sweeping up after it is a sport, I’ll never know. Chucking rocks on the floor and attacking them with a brush is what passes for housework in some parts of Wigan. I fully expect snowball fighting to be introduced by the time we arrive at the next Winter Games.

Then, on the radio on the way into work on Tuesday, there was a ‘news’ item about Bridge potentially being declared as a sport. Now that has to be taking the piss, doesn’t it? Playing Bridge, a sport? The debate about what truly constitutes a sport has raged for years and we seem no nearer to having a definitive answer; for example, is any team game a true sport, does it have to be energetic, does there have to be a trophy at the end of it, does there need to be a ball, or does it just need a set of rules – and if that last one is a valid criteria then where the hell does that leave Australian Rules Football? Or Australian No-Rules Football, more appropriately.

I certainly don’t intend attempting to resolve this very thorny and elusive issue right here and now – that would be far too serious a topic for this blog, for one thing. However, I do have a few thoughts on what should and what should not be categorised as a real sport. 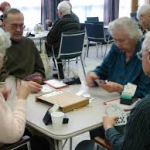 Bridge – So let’s start with Bridge. How can it be a sport when you have to be at least seventy years of age to play it and you don’t ever have to get out of a chair? Well, you do, but only to change sides to partner up with old Mabel on the next table. I think that any game that has the word ‘trump’ as one of its key terms does not deserve to be taken seriously at all. This probably applies to any card game to be fair, including poker, which is now regularly broadcast live on Sky. They truly will televise anything, that company. 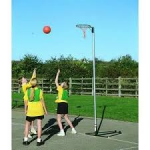 Netball – This may seem a bit controversial and maybe even sexist, but any game in which you are required to not remain stationary cannot really be a sport. I don’t profess to be any kind of expert in Netball, but I believe that I am right when I say that when you are in possession of the ball you are obliged to stand still. Furthermore, any opponent trying to relieve you of the ball has to remain still too, although they can hold up their hand in front of you like King Knut (Canute?). And then, once everyone has stopped, you can pass the ball. Really? We may as well introduce Pass The Parcel to the Olympics. 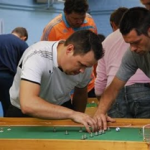 Subbuteo – Not sure if anybody who actually plays Subbuteo at the highest level (?) actually claims that it is a sport. However, there is a World Championship and numerous national leagues and so it is reasonable to assume that somebody, somewhere probably does think it is an official sport. It isn’t. It is clearly a game, a game for kids at that. Even if it is played by grown men who are still essentially kids at heart. I fully expect that Subbuteo will be introduced as a test sport in the 2020 Olympics, along with Pass The Parcel and Ker Plunk. 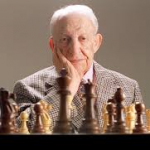 Chess – Following on from the card-game scenario earlier, I maintain that anything that is performed sitting in a chair can’t be a real sport. I am excluding saddles here, as horse-racing and cycling, for example, are clearly sports. But, sitting in a chair moving plastic figures around a board (see Subbuteo above) can’t possibly be classed as sporty. Also, chess has to be the slowest game in the world, closely followed by rugby union, of course. And, to cap it off, they normally play chess wearing suits. Not since the early days of golf have people played sports in a suit. In fact, the only other ‘sport’ in which combatants routinely dress in a shirt and tie is Dressage. In fact, there you go… Dressage! No further questions. How on earth making a horse dance can be considered to be a sport is totally and utterly beyond my comprehension. Dressage and chess – not sports. 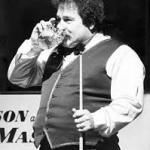 Snooker – It has long been debated whether games like darts, dominoes and snooker are really sports. They certainly fulfil some of the criteria for traditional sports, particularly in the arena of competition and technique. However, no matter how much you dress it up, there is no escaping the fact that darts, dominoes and snooker are games that are predominantly played in pubs, clubs and other drinking establishments. Therefore, they are all related to alcohol. Any game that can be comfortably played when the participant is half pissed can’t be a sport in my book. Plus, the snooker players wear bow ties and waistcoats. That’s going one step further than those ridiculous chess men and the horse dancers.

See you on the oche – Griff