“If you’re ever stuck for ideas for a 5-4-Friday, why don’t you write one about pies?”

So asked Martin ‘Jimmy’ Tarbuck, a fellow Wigan Athletic fan, who just happens to have written the odd tome on the subject of our mutually favourite team. Funnily enough, he also has a new book due for release in June, this time about… pies! Now, even I can spot a blatant 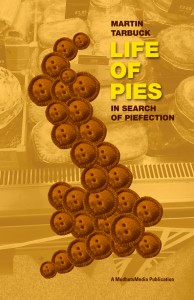 plea for a plug from a mile away, but I am more than happy to oblige. After all, I wouldn’t like to hear anyone muttering the words ‘kettle’ and ‘pot’.

Jimmy has spent the last year or so covering the length and breadth of the UK in search of the perfect pie. He apparently ate in excess of 400 pies during the course of his travelling and includes 314.2 of them in the book – see what he did there? It’s just a little maths joke for you. Or, should I say ‘math’, for the benefit of our American readers.

Of course, I didn’t achieve this svelte figure of mine by chowing my way through 400 pies, and so I will leave the hard-core, technical pie shenanigans to our well-researched expert. Instead, here are my alternative 5 “pies”.

Sarah Lynn’s pies – The fact that Jimmy has researched over 400 pies clearly makes me an out and out amateur in comparison. I wouldn’t even dare take him on when it comes to arguing the relative merits of different pies. I would, however, like to give a special mention to the Sarah Lynn’s meat and potato pie which, when slapped in between a thickly buttered barm cake, comprised my dinner (lunch) every school day from September 1980 through to May 1981. Absolute bliss. By rights, with that diet, I should have the spotty facial complexion of a pepperoni pizza.

returning to work earlier than their striking colleagues in neighbouring towns. In addition to this, it is inescapably true that Wiganers do actually eat a lot of pies. I therefore have no issue with being called a pie-eater as it is nothing more than a statement of fact. If, however, I hailed from Yorkshire or Wales and was called a sheep-shagger, then I would probably have to take exception to that.

Alan Pye – Alan is sadly no longer with us. He was a character I used to work with in Liverpool in the late 90s to early 2000s when lunch-time and post-work drinking was rife. I still find it incredible that myself and my colleagues would regularly shovel down 3, sometimes 4, pints in an hour-long lunch break. Yet Alan, and his circle of friends, would exceed even that ridiculous behaviour. One of their number in particular would often nip to the pub for a swift half or short while others were nipping outside for a quick morning or afternoon fag break. Is it little wonder that we never got much done? Or that the business ultimately failed?

Python – I have a pathological fear of snakes, so much so that even typing the word snake today is likely to result in a mild nightmare of some description tonight. I am therefore not going to talk about slithery pythons. Instead I will be discussing Monty Python, the comedy, film-making group. Specifically, I am selecting my favourite Python film. This is all very subjective, I know, but as a late teenager considering mild rebellion against his catholic upbringing, The Life of Brian has to be my choice. It’s a close run thing with The Holy Grail, but I think ‘Brian’ just about shades it.

Pythagoras – At school, I was one of a handful of people who were selected to sit our maths ‘O’ level in the 4th year rather than the 5th. The idea being that if we passed, which we did,

we would spend the 5th year preparing for ‘A’ level maths to give us a head start when we arrived at sixth form. It quickly became apparent to Mr Blackledge, the maths teacher and a keen darts player, that I had neither the inclination nor the aptitude for maths beyond what I had managed to scrape though at ‘O’ level. I therefore spent the whole of 5th year maths charged with working out different permutations for achieving a 9-dart finish in a game of 501. It was true, vocational education in action.

See you on the oche – Griff