I found myself in the rather unusual position this week of defending a Liverpool FC player. Not only that, but the player in question is Steven Gerrard – sorry, Stevie Geeee, as we’re supposed to call him – and he isn’t someone I particularly like. Mind you, like most members of the footballing public, I’ve never actually met the lad, so I’m not sure how I have come to the conclusion that I don’t like him as a person.

Gerrard has announced this week that he intends leaving Liverpool FC at the end of the season to finish off his career, taking it nice and easy in LA with his family for a couple of years. Nice work if you can get it. And it’s fair enough, 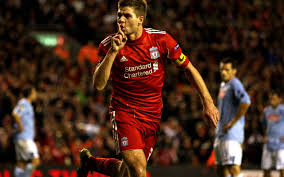 I think, after eighteen years at Liverpool and helping them to win ten major trophies while he was at it. You’d think that most people would wish him well, wouldn’t you? And that the rest wouldn’t care a jot.

Not so, as it happens. I have been quite shocked at the level of bile and vitriol that has winged his way since the weekend. He’s bled the club dry, walked away and left them in the lurch and is an absolute disgrace for taking millions of pounds out of his home town club whilst giving nothing back, apparently. Nothing back? As I say, I’m no big fan of his, far from it, but I seem to remember a Champions League final and an FA Cup final that he single-handedly won for Liverpool amongst other notable achievements. As well as spending his entire playing career there.

Now some footballers deserve the universal abuse that they get, in my opinion. John Terry, Ashley Cole, Steve McManaman (I have a few stories about him), Lee Hughes, Marlon King and, starting any day soon enough I suspect, Ched Evans. And I have to agree, that seems to be a fair selection of thoroughly obnoxious people. Again, because I have never met any of them, I shouldn’t really judge, but that doesn’t really stop people doing it anyway.

A lot of the abuse that some footballers receive has nothing to do with anything the recipient may or may not have done. It is pure jealousy of a “boy done good” story and of someone who has everything in life that the abuser would have liked for himself but was never sufficiently talented to make it happen. I think Gerrard falls into that category, although he has done one or two shady things, other than to play for a football team that the abuser doesn’t like – to attract criticism. I don’t think the following five guys have.

David Beckham – pilloried for being sent off in the ’98 World Cup his biggest crime appears to have been having a pop star wife, being universally fancied by the majority of the female population and speaking like Joe Pasquale. Seems like a decent lads to me.

Peter Crouch – Anyone who can answer the question “What would you be if you weren’t a footballer?” with “a virgin” is alright in my book. I simply can’t understand why he gets stick at all. I wold have thought every bloke would feel some sympathy towards him, given that he’s married to that horrible, whining scouse clothes horse.

Gareth Bale – Apparently looks like a monkey. Because all of those internet trolls that have photo-shopped the head of Galen from the Planet of the Apes onto action shots of the welsh wizard would all give George Clooney a run for his money, wouldn’t they? It’s pure jealousy of what seems like a thoroughly nice fella doing extremely well for himself.

Frank Lampard – The subject of footballers being slagged off for their physical appearance brings us nicely on to Frank Lampard. Or Fat Frank Lampard, as he is known. I was I was that fat, and that’s really all there is to say.

Gary Neville – Red Nev is one of the best examples of a player universally vilified simply for successfully playing professionally for a team that he clearly supports passionately as a fan. He receives dog’s abuse, but al fans would love to have players like that at their club. It must really stick in the craw that he has also gone on to forge an extremely promising career as a TV pundit and presenter.

See you with the lynch mob – Griff