After last week’s 54F in which I gave a flimsy case for sitting down at football matches, I suppose it is only right that I give over this week’s blog to presenting the alternative view. Having considered the 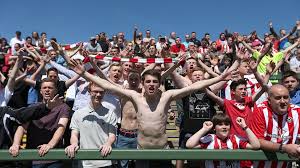 relative merits of both sitting and standing over the last week or so, I think I have arrived at the conclusion that I would much rather park my arse when watching football, if forced to choose. I think standing is probably the preserve of the young fan, the serial chanter/singer or, dare I say it, the wannabe hooligan. I fall into none of those categories.

However, far be it from me to say that those who hanker after, at least a partial return to, terraces are wrong or should not have their wish granted. On balance, it’s just that I think I would prefer to sit. That said, I am not particularly averse to standing either. In fact, I can think of a few aspects of standing that might actually make me change my view. And when I say a few aspects, of course, I mean five.

Get in!!  – Celebrating your football clubs’ goals is a funny old thing. Even the most staid of fan can turn into a complete mentalist when the ball hits the back of their opponent’s net. They will hug complete strangers, leap up and down as if they have 50,000 volts shooting through them with veins and eyes popping, and generally act the goat. Within the confines of a row of plastic seats, this can severely cramp the football supporter’s style. The clubs have tried their best to ‘help’ the atmosphere by blasting out Tom Hark (or that annoying tune they always play at the darts) to which best  practice dictates you are supposed to vigourously pump your arms into the air whilst stood stock still in front of your own seat. In a terrace situation, the additional space offers much more scope for freestyling. For example, you can easily wander off and find somebody more attractive to hug than the lardy lummox you are forced to sit next to every week.

Little Drummer Boy – As bad is it is being lumbered with a mirror-dodger to hug when a goal is scored, things could be a lot worse. You could find yourself wedged next to The Drummer. Blaring out Tom Hark is one thing, but clubs actively encouraging some 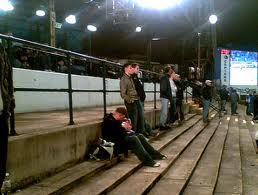 spotty youth to bring along his Fisher-Price snare drum is quite another. Fortunately, sitting in the tranquil sanctity of the West Stand of the DW Stadium week in week out, we are spared this annoying imposition. Imagine being stuck sat next to that every game? Or worse still, stuck between him and a flat-as-a-witches-tit trumpet player and being completely unable to get up and walk away?!

End-To-End Football – Most of my terrace memories emanate from the much-missed Springfield Park. It was an iconic ground, though not in a good sense. We loved it though, as it possessed qualities that will probably never be found at a professional football ground ever again. For instance, you learned never to make yourself comfy until the coin toss had been completed. This is because once it had been determined which end Wigan would be attacking, the whole crowd (I say crowd) would wander up to that end to, hopefully, get a better look at the goalmouth action. At half time, we would move en masse (well, I say en masse) to the other end for the second half. I suspect this kind of thing never happened at the Nou Camp.

Brrrr! –  This is bound to sound a bit nesh and girly but, nevertheless, it is an indisputable fact: it is much colder sitting at a football match than I ever recall it being in my terrace days. Maybe it is due to the fact that my bones are getting older, or my lack of hair coupled with a frequent inability to remember to take a hat, but by the end of a game I am always in need of a warming pint of beer. It might also be the case that the relative ring-fencing nature of an all-seater stadium has seen the demise of the practice of some anonymous scrote taking a piss down the back of your leg. As disgusting as it was, it would keep you nice and warm on a chilly January FA Cup third round day.

Duck and Cover – This might surprise you, but I have been known form time to time to engage in quite heated argumentative banter with both friend and for alike at football matches. Fortunately, what sometimes passes as humour rescues me from a potentially sticky, and quite possibly violent, end. In the days of the terrace when I went too far, it would be quite easy to slip into the shadows and escape to another part of the ground, thus averting the threat of having my boyish good looks rearranged by someone who fails to see the funny side of my joshing. You’d think that being stuck in the immediate vicinity of one’s verbal adversary in a seated environment would temper one’s behaviour accordingly. And, in all probability, it would temper yours. As for this mouthy gobshite, however…

See you at the crush barrier – Griff