Social media is full of people expressing their hate for this country at the moment. There are people on the left having a pop at the right and how they are ripping us all off and those on the right moaning that we are letting in too many free-loading foreigners.

Personally, I’ve always believed that this country is the 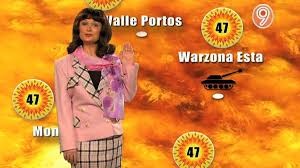 best in the world and I would never go anywhere else on holiday, provided we had guaranteed good weather. I’ve probably changed that view somewhat as I’ve got older. I quite like Florida. And the south of France. And in any case, we are not guaranteed good weather, are we? Far from it, so it’s all fairly academic.

And maybe the fact that good weather occurs so infrequently goes some way to explaining why we get so excited when the sun does eventually emerge from behind the clouds. It doesn’t have to emerge for very long in Britain for us to declare that summer has arrived and to start making the most of it. And, to be fair, why wouldn’t we make hay, because we know it isn’t going to last very long.

If you’re unsure whether (excuse the pun) summer has actually arrived, here are five tell-tale signs for you.

Convertibles – every estate will have some sad 50-odd year-old duffer who will whip down the top of his convertible 2003 Astra 1.6, put his hat and gloves on, crank the heating up to nuclear and tootle off to Asda where, hopefully, it will piss down with rain while he is in-store looking for some new driving gloves in the George aisle.

B&Q – suddenly, you cannot move in DIY stores due to the throngs of people buying garden furniture and industrial sized bags of compost, lawn feed and barbecue gear. If you can’t face going to B&Q to find out if it’s summer yet, just whizz past our next door neighbour’s house (no, not you two, Chris, the ones on the other side) and if it’s smoking like a Queensland forest fire and the grand-kids are screaming like banshees from hell and terrifying the cats, summer is well and truly here.

Daily Express – at the first hint of watery sun, the Express will warn old people to stay indoors where it’s cooler, panic that dogs will start to die in droves their owner’s 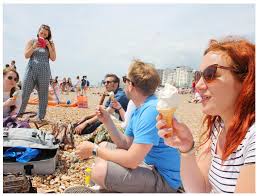 locked cars and list all the places in the world that are currently colder than Blighty. It will be accompanied by a photograph of some dizzy blonde who works in Next in Brighton sat in a deckchair on the beach in her lunch break.

Trains – Thankfully, I don’t have to suffer this daily living nightmare these days. In winter, long-suffering Northern Rail commuters freeze their bits off as what puny amounts of energy the engine has are expended on lugging four hundred passengers in two carriages into Manchester rather than actually heating the train. That seemingly isn’t an issue in summer as the heating in the train is at least double that of the outside temperature and almost matches the temperature inside that berk’s convertible mentioned above.

Clothing – By far the worst sign that summer has landed is the change in general attire, which basically consists of flip-flops, Disco Dave three-quarter length pants and Lonsdale vests for the blokes and any pink or turquoise skin-tight vest top that you women can find in the back of the wardrobe. But at least these people are actually clothed. Quite what possesses men – it’s mostly men, thankfully – to wander the streets with their beer gut and moobs on full show, I just don’t know. I’d say less if it was the ones who could get away with walking around half-naked that do it, but they seem to know better. If you need an example of the type I mean, can I please point you in the direction of my next-door neighbour again – and again, Chris, I don’t mean you.

See you in the Wetherspoons’ beer garden – Griff