It’s beginning to look a lot like Christmas… well, there’s no snow on the ground yet but it’s certainly at least starting to feel a bit like Christmas. The Christmas telly mags are in the shops, the brass bands are collecting outside supermarkets and it’s the Sports Personality Of The Year show on the Beeb on Sunday night – a sure sign that Christmas isn’t too far away.

To be honest, I quite like Christmas. At least I like Christmas Eve and Christmas Day itself and all that present malarkey and drinking loads of wine without being nagged like what happens on any other day. It helps having a ten year old son though who, although he no longer believes in Father Christmas, does believe in being spoilt rotten with presents that lighten his little face as broadly and quickly as they lightened my bank account.

I don’t mind the Sports Review of the Year and the odd brass band as a sign that Christmas is coming; I can cope with that. It won’t surprise you to learn, however, that a few of the other tell-tale signs of impending Yuletide joy get on my nerves somewhat.

Christmas Songs – I don’t listen to the radio much and, when I do, it’s usually Talksport. It means, therefore, that I very rarely find myself getting annoyed at hearing Chris Rea’s “Driving Home For Bastard Christmas” blaring across the airwaves. The same goes for Sniff Pilchard’s “Mistletoe and Wine”. Anyone who owns a copy of “Now That’s What I Call The Best Ever Christmas Songs…2” deserves to be strung up from the nearest fibre-optic Christmas tree.

Secret Santa – Apart from staff one-to-ones and the annual, pointless Performance Review, is there anything more futile in the work place than the office Secret Santa? It’s nailed on that you will draw out of the hat the one person in the office you wouldn’t normally give the time of day, let alone a Christmas present. Suffice to say, whoever has the misfortune to get me as their buyer will be enjoying/enduring a copy of one of my books this Christmas – ARSED for a boy, Virgin Parents for a girl. It’s equally nailed on that I will now be given a copy of “Now That’s What I Call The Best Ever Christmas Songs…2”.

House Lights – I don’t know what it’s like in your street but, one Sunday afternoon, about three to four weeks before Christmas, some hen-pecked loser will put on his fleece jacket, drag his ladders out of the garage and freeze his bollocks off clipping blue flashing lights to the guttering of his house. Every other bloke in the neighbourhood will curse him to the heavens because they know full well that means they will be the ones nagged into doing it next. Fortunately, in our house, The Lad has inherited my Grinchness and has decided that he can’t see the point in sticking lights on our house because all they do is keep him awake when he’s trying to sleep. Well, who am I to over-rule a ten year-old at Christmas?

Office decorations – If it isn’t bad enough being nagged at home about the lack of festive furnishings, you also have to put up with the Decoration Police in the office as well. This sad animal is usually the kind of office dweller who will grasp at the slightest excuse to dodge a few minutes work. They will spend most of the morning trying 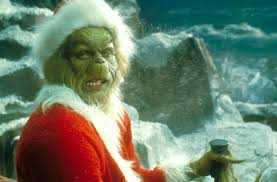 to remember where they stashed the decos after last Christmas and the rest of the day putting up twelve-inch plastic trees and bullying you into having some cheap tinsel blu-tacked to your monitor. “No thanks love, and pinning that sprig of mistletoe above your desk is a waste of time and effort, too. Are there no mirrors in your house?”

Supermarket Hysteria – And you finally know that Christmas is imminent when Asda and Tesco begin to resemble a war zone. Or Oldham. Asda is closed for all of twenty-four hours – just Christmas Day – and yet people ransack the shelves as if the four-minute nuclear warning has just been issued and we are all about to be bunker-bound for three months. Seriously, what is wrong with people? And who are these people who are stock-piling dates, olives and after-eight mints? Nobody ever eats these things for 364 days of the year but then insist on gorging on them through all the Queen’s speech and the other Royle family, as if it is their last supper and these things contain the secret of eternal youth. I really don’t get it. But then again, as my granny used to say, it would be a boring old world if we were all the same.

See you in the Secret Santa grotto – Griff