With Christmas just around the corner, and the plethora of Facebook pages pushing nostalgic images of growing up in the 70s/80s/90s (delete as appropriate), I cast my mind back to recall various toys and games from dim and distant Christmases past. I don’t know who I’m really kidding, because all we used to get in Wigan was a lump of coal to play with and a tangerine to share. Anyway, here are a few of the items that immediately sprung to mind. 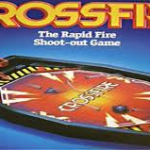 As you might be able to make out from the picture, this game was fairly basic. The object of the game was to fire metal ball-bearings from a rotating plastic gun at a puck and knock it into you opponent’s goal. It was a bit like air hockey without the risk of rapped knuckles. However, even if your knuckles were safe, the insider of you trigger finger was most certainly not. Huge blisters were commonplace and while your mum treated them with Savlon and a plaster, your dad would fish around under the couch for any stray ball-bearings ready for the next round.

Striker/Big League/Subbuteo – Well, any table-top football game basically; I had them all. Subbuteo was the most common but also the most technically difficult to master.  Also, 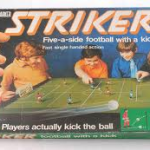 I never played Subbuteo on a table top, always on a carpet. If you were clever, you would strategically position the pitch on a ridge or kink in your carpet to give you an advantage over any visiting opponent.  Striker! and Big League were slightly different in that you didn’t flick them as you did in Subbuteo. Instead, the players had a spring loaded leg that was operated by bashing him (no women footballers in those halcyon days) on the head (Striker) or pulling back and releasing his right leg (Big League ) to make the player kick the ball. If you pulled back too hard on the leg it would snap off, which was career-ending – there was no such thing as Superglue in the days of Big League. 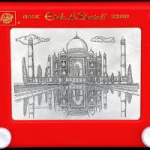 everybody have one of these?  I did, but certainly never managed to generate the kind of art with it that is re-produced on the image here. Spielberg himself wouldn’t be capable of creating that image on Etch-a Sketch.  Any picture I created had to consist of straight lines only. Even then, after four or five straight lines and right-angle turns I would get bored and wildly spin both dials simultaneously to give a squiggle pattern which for me, art-wise, was as good as it ever got. Never really took to it and got rid of on Swap-Shop at Central Park (Wigan, not New York).

Arnold Palmer’s Proshot Golf – Now, this was the daddy of all sport games for my money. 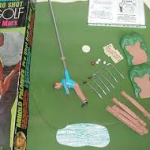 Well, not my money, nor my mum and dad’s, to be honest.  It was my mate, Andy, who owned this little gem. Basically you had a long-stick, not dissimilar to a real golf club with a loop pull and a plastic golfer stuck to the bottom end, into which a tiny plastic golf club was inserted.  You pulled the loop which would swing the club and make the golfer, hopefully, hit a small polystyrene ball.  The game came complete with a putting green, bunkers, boundary markers and, of course, a flag and a cup/hole. Once on the green, the polystyrene ball was swapped for a little marble which rolled much more effectively than the polystyrene effort. You could design any length of hole you desired and our favourite challenge in Andy’s house had the teeing ground in his sister’s bedroom, went across the landing, down the stairs into the living room and turned sharp right through to the green at the far end of the kitchen. A very tricky par seven. Not for the faint-hearted. 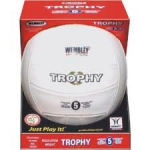 The Trophy was not a leather ‘casey’ type ball that was used when playing on grass. We are talking here about a hard, plastic, orange ball (even though the picture here shows a white one) which, although perfectly good on grass, was much better equipped for the street or school playground game. Even if, as a player, you were more David Brent than David Beckham, you were guaranteed to be picked to play if you brought your own Wembley Trophy with you. The only down side to the Trophy was the excruciatingly painful stinging sensation that accompanied a blow to an exposed thigh in very cold weather.