Ooh, I don’t feel all that comfortable with this week’s 5-4-Friday! I’ll happily bore people stupid with my opinions on most topics but I usually shy away from political debate. Not so much because it can be divisive and emotive and cause punch-ups, more because I don’t have a scooby what I am talking about and have even less interest.

However, I suppose that no self-respecting blogger (not that I have much of that, have you read this stuff?) can ignore Brexit. It’s everywhere! I’ve been off work today and h 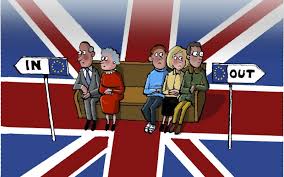 ave been watching Sky News all day – disappointingly, Sarah-Jane Mee was off sick; we must have worn her out hosting the Home Instead Senior Care conference in Liverpool at the weekend – but it was still highly entertaining listening to politicians on all sides of the fence wriggle and squirm, convincing themselves that they are right and everyone else is wrong.

For what it’s worth, I voted Remain. This was mainly because I didn’t trust the arguments on either side and, being a big Kylie fan, I went for better the devil you know – who’d have thought we’d all be spinning around for the next two years! Now, I was as surprised as the next man when the vote was Leave, particularly given that when I’d gone to bed the night before, they were predicting a fairly comfortable win for Remain.

Mind you, not as surprised as David Cameron was, I expect…

… David Cameron – now, I quite liked David Cameron. Yes, yes, I know, like all politicians he couldn’t have freckles because he’s so greasy they’d slide off but, relatively speaking, I thought he was OK. But, sorry Dave, you can’t put your money on what you think is a dead cert at the races and then piss off home in a strop when it comes in last. “Really? You all want to leave? You’re all mad you lot, screw you, I’m off!”…

…. which left everyone else to pick up the pieces. And, keeping up the racing analogy, how many MPs have swapped horses mid-race since then? 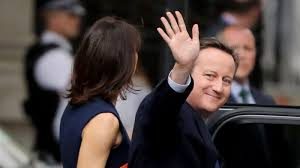 No idea, have you? I can’t keep up. Theresa was once a Remainer but, because she got the top gig, simply swapped sides. Boris changes his mind more often than I change my knickers, and poor old Jeremy just sits there in the corner disagreeing with everyone. Come on fellas, it’s a bit bigger than mundane party politics this one; at least try to think about the other 60 million of us as well as yourselves or once. Aren’t we all in it together? Oh no sorry, that was Dave’s line, wasn’t it? Where is Dave, by the way?

Referendum – it surely can’t just be me who knows that there is absolutely no legal or parliamentary obligation to actually act on the result of this referendum? The only thing I know that no-one else knows is that I lost my car keys on a big field playing football this morning and had to search through acres of muddy grass to find them – ah shit, you all know now, don’t you? And for God’s sake, spare me all that “will of the people” drivel. I wouldn’t trust the people of the UK to sit the right way on the toilet. So please, don’t take any notice of us, whatever you do! Just pretend Dave never asked in the first place.

The “final” debate – what today’s viewing of Sky News has taught me (apart from the fact Sarah-Jane Mee can be forced to take a day off after spending a weekend with me – a bit (lot) of poetic licence, there) is that there is absolutely no chance of this latest deal getting through Parliament. So, why are we even bothering with these five days of debate and a pointless vote on Tuesday that will just set us back to square one? What an utter, colossal waste of time and effort. Poor Kay Burley had to stand outside all afternoon in the freezing cold, and for what? Good call chucking a sicky today, Sarah-Jane!

Passports – what’s so wrong with a burgundy passport anyway? It’s not quite Home Instead Senior Care Purple, but it’s close enough. Blue is so not the colour.

If anyone would like to continue this Brexit discussion, you can bugger off! I’m bored witless now.

See you at the ballot box – Griff