There was an interesting piece doing the rounds on Facebook and Twitter this week which picked out some common traits to be found in a typical 5-a-side line up. The author identified 19 different types of personality to be found on your average 5-a-side Astroturf football court. Not all at once, of course, as that 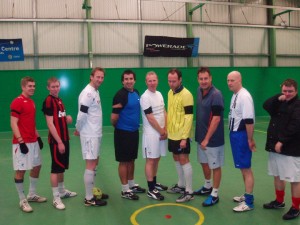 would clearly make it a 9.5-a-side court and a very crowded one to boot.

At TNF (our Thursday Night Football session in Wigan which takes place, er, well, on Thursdays) we have examples of all 19 character types identified in the article. To be fair, most of them are blatantly obvious entries; the perennial late-arrival, the wannabee coach, the non-payer, the reluctant keeper. You’d recognise them all.

You can read the full article here – and you really should, because it’s much better than mine – to see how many of your regular football squad you can spot in the list of nineteen. At TNF, we have them all, and more besides. As both player and treasurer/administrator for our weekly motley crew, here are the five types of 5-a-side footballer that get right under my shin-pads on a regular basis.

Fantasy footballers – I know we’re all only out there for a bit of a kick-about. It’s a half-hearted attempt to keep fit and provides the justification for a couple of pints and a bit of piss-taking in the boozer afterwards. But there are some who think they are Lionel Messi out there and will attempt the impossible at every opportunity. These flicks and tricks come off once every Preston Guild and, when they do, they spend the entire post-match beer time talking about it as if it happens three or four times every game. They see no need to pass to anyone else. Indeed it is worth letting them have their own ball to play with, if not their own court.

Unrule-y players – These guys only what can be described as a passing acquaintance with the core rules of the game. Despite being the clumsiest, dirtiest players on view, they have never knowingly committed a foul despite everyone else on the court, including their own players telling them otherwise. Similarly, whenever they lose the ball it is always because they have been fouled. The will happily spend the whole hour arguing whether a defender has encroached in the penalty area by the length of a big toe-nail and claiming penalty after penalty. They are a right royal pain in the arse.

Tight markers – At £3 per man, TNF must be the cheapest game of football in town, especially considering the quality of the facilities. Yet, getting some people to pay it is an absolute nightmare. They will turn up with all manner of permutations of silver coins. There is neither a pound coin, nor even a fiver in sight. These are also the same people who refuse to use the automated (free) SMS service we use to confirm attendance because they don’t want to waste a text message that says simply “Y” or “N”. For devilment, I often send them a personal text later in the week (free to me) asking if they are coming to which they invariably reply (at cost to them). I try to keep this dialogue going for at least two or three texts each, to try to push up the cost.

Creative accounting – These are people who have an unhealthy need to win every single game of TNF. They tend to the same players tagged as “unrule-y” above and are obsessed with keeping score. This is especially true if their team is in the lead. Not only do they loudly update the score every time they score, if they are well in the lead they will announce the latest score after each successful pass, just to remind you. If their team is behind, they will question the score after each goal displaying an unimaginable – and deliberate – lack of basic mental arithmetic. They will attempt to have each of their goals count double and deduct one from the opposition’s tally at the same time. So, say the score stands at 8-4, a goal subsequently scored 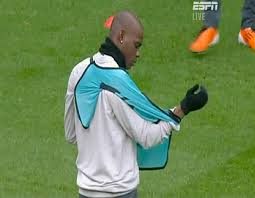 for the trailing side will see them claim the new score to be 7-6. It rarely works, of course. Not when we have a couple of fully bona-fide, qualified accountants in the squad.

Bib-jibbers – If we can’t get people to text their availability with a simple yes or no text, we would have very little chance of coordinating kit colours to distinguish the two sides. So, we don’t even try. Instead, one side wears the fluorescent yellow bib of the type that Mario Balotelli so famously struggled with. Very few players like to wear the bibs and even less like to take them home and wash them. I know this because I shout for a volunteer at the end of every game and every player immediately cocks a deaf ‘un and runs off. That’s bad enough, but as they wander off still wearing the bib, this forces me to chase after them to retrieve it and stick it in the bib bag. At the same time, of course, I will be manfully trying to prise two 50p coins, five 20p, eight 10p coins and four 5p coins for their sweaty, vice-like grip.

See you in the penalty area – Griff