I have been very fortunate to have worked for firms that have paid for me to fly to many places across the globe over the years.  Other than a particularly bumpy landing in New York and sitting on the tarmac at Paris for six hours before being allowed to depart for Athens, I have had very few actual dramas airside, as it is referred to by we seasoned travellers. Neither have I had very many dramas landside to be fair, but some of the airports visited do stick in the mind for various reasons. 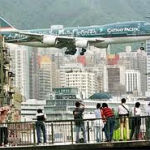 Hong Kong – as a young lad of twenty-two, having previously only flown to Gran Canaria, I was asked to go to Hong Kong for a week. Pre-flight, my Uncle Frank who had travelled extensively, regaled me with stories of being able to look in the windows of the skyscrapers as you approached the old airport in Hong Kong. I took it with a pinch of salt, him being prone to a touch of exaggeration and embellishment – it takes one to know one – until I actually sampled it for myself. The picture on the right has not been photo-shopped and represents very well the proximity of the buildings to the flight path.  It isn’t what you really want to see on your second ever flight.

Norfolk, Virginia – In 2007, on a small internal flight from Norfolk in Virginia in the States to Newark, New Jersey, I was told by the gate crew that I could carry on my lap top bag rather than put it in the hold. They said it wouldn’t fit in the overhead locker but I could put it under the seat in front of me – fairly normal procedure. Once on board, the air-head air-stewardess told me that no, I would in fact, have to put it in the hold because it protruded from under the seat about half an inch which could cause someone to trip over and cause an accident and/or panic. When I pointed out that “someone” would have to be coming from the vicinity of my lap area to be in danger of tripping over it, I received the mother of all lectures on post-9/11 security measures, with the woman insanely suggesting that someone could decide to grab the bag and use it as a weapon. When I suggested that perhaps the 10” metal knitting needles that the lady in seat 6A was using to knit a scarf would probably make more potent weapons, my little lap top bag ceased to become the centre of attention. I don’t know to this day how that little old lady – she was the spitting image of Tweety Pie’s mum, by the way – managed to get those needles through security. 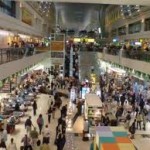 Dubai – the airport in Dubai has to be one of the most palatial airports in the world. It certainly knocks that crappy little Liverpool John Lennon airport –  above us only damp – into a cocked-hat. The check-in, security and baggage reclaim areas are huge ornate expanses of marble floors and glass chandeliers. However, the most important areas, ie the food courts, bars and duty free shopping etc, are all funnelled and squashed into one extremely small narrow corridor just shy of the departure gates. And, as I once found out to my cost, the ratio of toilets (and associated toilet paper) to punters is simply too low. No please, don’t ask, it isn’t pretty.  Anyway, if you ever find yourself caught short in that area of the airport in Dubai, come down the escalator near the main duty free shop (the one you can maybe just about make out in the background in the centre of the image above left) and turn sharp left down the corridor. Follow the sign for the Cleaner’s Room, and you will find a hidden gem of a row of toilets with more toilet paper and other cleaning products than you can comfortably shake a, well, er, stick at.  In three years I never saw anyone else use those toilets. Apart from cleaners.

Gdynia – Not long after the fall of the Iron Curtain, I went to Gdynia in Poland. Gdynia is a beautiful town with lovely people. Its airport can be described at best as austere and at worst as a dirty, soulless concrete bin. I think that the lady – I say lady – on the immigration desk was Rosa Klebb’s worse-looking and more miserable older sister, clearly coming into work at the wrong time of the month, if you catch my meaning. She spent an absolute age flicking through my newly-acquired, pristine but stamp-less passport, looked me up and down and said with barely disguised contempt: “You haven’t been to many places have you?” If you are looking for a sure-fire way to have your suitcases emptied and searched thoroughly for twenty minutes with a fine tooth-comb, the answer you should give to this question is “Maybe not, but I bet I’ve been to plenty more than you have, love.” I’m sure I heard the sound of AK-47’s being primed behind me.

Marseille  – ah, Marseille. The European Capital of Dog Shit! You know you have been taking the same Friday morning flight home from Marseille via Paris for far too long when the waiter spots you coming through security and has a beer, a cheese and ham baguette and a receipt waiting for you by the time you reach the bar. It also tells you that for the second largest city in one of the largest countries in Europe, Marseille is actually a very small and provincial airport. In Departures, pretty much all you can do is check-in, buy a paper, have a coffee or a beer and a butty and then wait for them to send your baggage down the wrong chute and end up in Munich. The Arrivals hall, in addition to having even less ameneties to while away the time when waiting to collect your passengers, is actually quite disconcerting. There is no security door between the baggage carousel and the car park. This means that any Jean, Marc or Pierre can simply waltz in off the street and nick your bags while you are still making your way from the plane at the stand. This being France, of course, nobody can actually be arsed to do it. Plus, in over one hundred trips to Marseille my bag never once arrived at the baggage carousel before me.

Have a great weekend.