It’s always been a bit of a dilemma having work colleagues and associates as Facebook friends, for me. At best it’s style-cramping, at worst, career-threatening. I’ve managed to avoid it thus far, only starting to stalk/bore the life out of colleagues once I have moved from that place of employ.

I have, therefore, recently tried to resolve this, and kill another bird with the one stone at the same time. I have now created a second Facebook account which will allow me to separate work from pleasure. Not that work isn’t a pleasure of course, but you get where I’m coming from. My new account will be predominantly – though not exclusively – for work\business related posts and will attempt to be a little more grown-up and a little less sweary then my personal one.

I have used Chris Griffin as my name for that new account – fancy that! – but have created a new, more mature bio and profile for it. When I subsequently searched for the new account to see if it looked/felt right, I found that there are now dozens and dozens of Chris Griffins on Facebook.

Having the attention span of a goldfish, I soon forgot about checking the new account and, instead, found myself scrolling through the list of my namesakes in Facebookland. 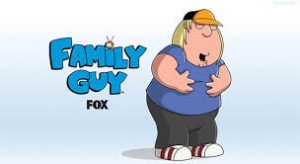 It’s a little bit weird, seeing all these random people who have the same name as yours. It soon became apparent, however, that this would be a perfect subject for the latest 5-4-Friday.

I’ve picked here the first five Chris Griffins that piqued my interest as I scrolled through. Note that anyone who has used an image of the Chris Griffin character from Family Guy as a profile picture was instantly disregarded as far too dull and unimaginative. Similarly, anyone with a nickname of Griff (who would be so lame?) was immediately over-looked.

With a very cursory, nay reckless, nod to any privacy and anti-stalking laws, here are 5 Chris Griffins:

Chris Griffin #1 – The first one I came across was from Wales and stuck out because his bio said that he had recently read the Official Highway Code. Who reads that for fun? Further digging into his publicly available data showed multiple photographs of people seemingly passing their driving test, which seemed totally random until I realised that he is a driving instructor by profession. Not that weird then, I suppose after all, just incredibly sad.

Chris Griffin # 2 – Next up is Chris “Rocky” Griffin who stood out like a sore thumb with that middle name. I’m guessing that “Rocky” doesn’t appear on his official birth certificate. I dug deeper, fully expecting to find something else to ridicule. However, the first post on Rocky’s timeline was what seemed like a heartfelt plea to re-unite with a daughter whom he hasn’t seen for twelve years. In all seriousness, it didn’t seem right to continue after that. That said, I was tempted to suggest he removes the Rocky from his account name to see if she comes out of hiding, but decided to let it go.

Chris Griffin #3 – The third Chris Griffin has a very varied CV. He has worked, or maybe studied, at the Vauxhall School of Building, whatever that may be. He is also a former Plâtrier at Shepperton Studios, which sounded rather grand until I found out that plâtrier is the French word for plasterer. He is currently studying gynaecology at the afore-mentioned Vauxhall School of Building. No, me neither. He refers to his first-born daughter as “My Princess”. Fair enough, I guess. Then, eleven years later he has another daughter and, with a spectacular lack of imagination, refers to her as “Also My Princess”. Eleven years to think up something original, and that’s it!

Chris Griffin #4 – Our penultimate Chris Griffin has a nickname/previous name of Anita Round. Wait, what? How the hell does that work? She (or he, who really knows?) hilariously and originally (not) has attended the School of Hard Knocks and the University of Life. Ordinarily, that level of lame humour would be sufficient to ignore her completely, but Chris/Anita claims to come from the beautiful city of Cork in the West of Ireland and subsequently moved to the grotty town of Clacton on the east coast of England. Anyone who makes that move must have serious issues.

Chris Griffin #5 – Our final Chris Griffin, seems to have a bit of the Walter Mitty about him. His profile is pretty non-descript to begin with, apparently being dragged up in Fleet in the south of England, before receiving schooling in Farnborough and at Portsmouth University. Then, out of nowhere, he is suddenly living in a place called Griffintown in the US. Really? Have you just made that up Chris, or does it really exist, because I can’t be bothered Googling it? I’m not sure what would be worse though, pretending that you live somewhere that sounds like your surname or physically upping-sticks and moving there because it has your surname in its name.

See you in the cloning clinic – Griff