A while back, May 2014 to be exact, I wrote a blog bemoaning the use of nauseating phrases in the workplace, particularly in meetings. Taking people on a journey down their happy path, warming them up and informing parts of projects are all phrases that, normally sane, people would regularly trot out, in everyday speak.

But, this is 2018 and so we have moved on, haven’t we? Well, no, not really, we haven’t. We’ve just moved on to other annoying words and phrases. Which wouldn’t be so bad if the old cringe-worthy sayings had disappeared, but they haven’t – we just have even more of them to put up with.

Fortunately, colleagues at my current place of work are fairly grounded, plain-speaking people, not usually prone to using this kind of phrase. Sometimes they slip up but, when they do, they invariably take themselves off and give themselves a good talking to. However, we obviously can’t avoid hearing them from third parties we deal with every day. Maybe it’s just me, but I doubt it. I can’t be the only one who thinks we are using new words and phrases to describe or refer to things for which we already have perfectly good alternatives and have had for years? See what you think.

Consume – I’ve been in this IT/systems game for longer than I care to remember, over thirty years (only just over, mind) and, in all that time, we have referred to people as Users. We treat them respectfully, even giving them a capital “U” to emphasize their importance. And we call them Users because they use our systems. Now, apparently, they consume our systems, products and web pages. No thanks, I’ll stick to use, thank you very much.

Cohorts – People who can be grouped together, for example, those who use (use – see what I did there?) similar systems or have similar requirements are apparently to be referred to now as cohorts. Why, just why?! The last time Cohort was used in regular conversation was when the Romans sent loads of them over here to build our roads. We could do with 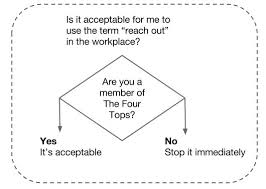 them back, to be honest, given all the pot-holes we have, but I digress. I don’t know what phrase we have always used to describe common groups of people – common groups, probably – but I’m confident we don’t need to be using cohort.

Circle Back – If we’re not nicking words from the Roman Empire, we’re doing the exact same thing with the Wild West. “Make sure you circle back with Bob”. What, you mean talk with Bob again and re-visit whatever it was you were talking to him about in the first place? Or, are you going to sneak up behind his waggon and scalp him while he isn’t looking? It really is getting ridiculous. Ricky Gervais and David Brent from The Office have a lot to answer for.

Reach Out – I’m sure many famous song titles or song lyrics have found their way into everyday language over the years but, it’s my day off and I can’t be bothered researching that assertion. I’m sure someone has said “I heard it through the grapevine” when discussing some salacious office gossip, and I’m prepared to let that slide. However, continuing the Motown theme, if you want to talk to someone, just call them, contact them, or ask for their opinion – no-one should ever, ever “Reach out” to another human being. Unless you’re Levi Stubbs – google it, kids.