It’s amazing the little things that can cause a row at home. There are things that you do that you think is perfectly acceptable behaviour that really winds up your partner and can cause the most horrific, pointless rows. And vice versa, of course; there are little, seemingly inconsequential things they do that wind you up to breaking point and beyond.

I’m thinking about relatively petty things like leaving the doors open downstairs at night so that the cats are free to roam upstairs all night. Or, not pushing the cushions back on the settee properly after your fat arse has gradually squeezed it out as you slobbed there watching episode after episode of Game of Thrones. 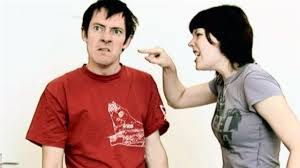 Or, washing a pan and putting it in the drainer without first putting away the single teaspoon that is already sat in there, dry as a bone. Or, leaving the TV on standby overnight.

All fairly petty things, I think. I’m sure there are also things that I do that get on her nerves, too!

At work, such petty things rarely result in an actual row or argument. Perhaps this is because society dictates that you bite your lip in the office at something which, at home, might see you absolutely blow your stack. Here are a few examples of things that typically get on my nerves at work but that never, ever end up becoming a real issue.

For those people reading this who happen to work with me, only two of these scenarios actually occurred in our workplace this week, so don’t go thinking that this has been sparked off by events at my current employer or that the finger is pointing at you. All five, however, are pet gripes that have pissed me off ever since I first found gainful employment about twenty five years ago.

Cold calls – It’s bad enough when you get those annoying cold calls at home about PPI claims or accidents you have had that maybe weren’t your fault. But these pale into insignificance for me compared to the unsolicited calls you receive at work, often from salesmen trying to flog you something you have no interest in, or authority to buy, but mainly from speculating recruitment agents. “I’ve seen your CV on gizzajob.com and have a dog’s arse wiper’s job that fits your skill set perfectly”, they say. No, you haven’t! All you have done is remove all the filters, bar “Axe-murderer”, from your database, performed a mail merge and spammed everyone you’ve ever heard of or whose name you vaguely recall seeing once on LinkedIn. Then, you follow it up with a snotty email complaining that I didn’t return your call. Well, get used to it. Until I’m next on the job market, at which point, I will welcome your call with open arms.

RSVP – Notwithstanding those PPI callers mentioned above, you wouldn’t dream of answering the phone at home, realising it is someone you know but then immediately just hang up without saying a word because you can’t be arsed talking to them. The workplace equivalent of this is receiving a meeting request and declining it without even providing a reason why. That winds me up. The worst scenario is when you are in a meeting during which you all agree to re-convene at a later date and time but, despite no-one raising any objection at the time, when you get back to your desk and issue the new invite, half a dozen people immediately decline. Without leaving a reason why, of course!

Kitchens – Ironically, I am seriously running the risk of subjecting myself to accusations of kettle and pot by talking about people leaving kitchens in an untidy state. Again, though, people treat these completely differently at work than they

would at home. Dirty mugs and plates are left lying around with no thought given to putting them in the dishwasher, let alone switching it on. And teaspoons, where they hell do they all go to during the day? A stock of around 50 teaspoons for a floor of 100 people disappears without trace before half past nine. I swear we go through more teaspoons than toilet rolls at our place.

Personal space – I do confess to being a bit anal about my desk and its surrounds, probably more so than most people. In this day and age of mobile working, many people are now used to hot-desking or just plonking themselves at the nearest piece of MDF with an adjacent network access point. That doesn’t alter the fact that you are actually sitting at my official, designated place of work. So, don’t unplug my keyboard and chuck it on my neighbour’s desk because you’ve got your own lap top, don’t use my mug or nick my pens, don’t feel free to have off with my iPhone charger and do not, under any circumstances, alter the height and elevation of my chair. You will end up getting hurt!

Meeting etiquette – And if you’re not pissing about with my stuff at my desk, you’re probably sat in a meeting room with me. We’re probably having a meeting, funnily enough, with all the others in the room, apart from those who declined without giving a reason, of course. It’s a meeting, a collaboration. It’s not an excuse to catch up on your emails on your lap top, or to text your missus about plans for tonight’s tea or, and this really gets on my paps, to have your own private little meeting with your team mate sat next to you while the poor sap who organised the meeting struggles on manfully and finds himself apologising for talking while you’re interrupting. Don’t blame me if he chucks a board duster or Blackberry at you. I know I would, if it were my meeting.

I really need to chill out, don’t I?

See you at the HR tribunal – Griff