Tomorrow’s game at the DW Stadium is not a run of the mill Wigan Athletic home game. It is also a Birthday Bash game, a concept you will learn much more about when you read my new book (A.R.S.E.D!) which is due out in time for Christmas – have I mentioned that before?

Essentially, it means we are out on the lash before, during and after the game. This used to be the norm but nowadays it is very much the exception. All that football watching and beer drinking leaves very little time for food and so it is vital that you stodge up before you leave the house. Here are five of some of my more regularly recurring Saturday pre-match, dinner-time meals down the years  – and by dinner-time I mean lunch, to you lot outside of Wigan

match diet. Two slices of toast – unbuttered – completely covered in the contents of a tin of Heinz Spaghetti Bolognese. Sometimes, as a special treat or if I was particularly hungry, I would top it with a couple of fried eggs. It always had to be eaten between noon and 12:30 for a 2:30pm kick off and washed down with a pint of milk.

Scotch Broth – if you had the prospect of drinking throughout the duration of a cold winter’s day ahead, a tin of 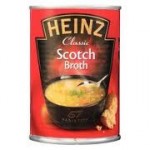 Scotch Broth was the perfect belly warmer to fuel you on your way. However, a simple bowl of soup, even Scotch Broth, the daddy of them all, is not sufficient by itself to keep you going. It must be accompanied by heavily buttered bread for the purposes of dipping. In years gone by, eight to ten slices of bread and butter would be the optimum quantity. These days, I rarely attempt more than four. It’s what keeps me so svelte.

Chinese Chicken Butties – this is the butty of choice for the away day coach or train trip. They have a little bit of a 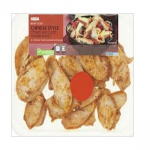 kick to them and are absolutely delicious drenched in mayonnaise. They have become as much a feature of our away coach trips as cracking the first can over Thelwall Viaduct and the toilet floor swimmming in urine by the time we reach Sandbach. Ew! Anyway, back to the butty, it’s a step up from the relatively common corned beef and exudes that extra class to set you apart from the rest of your traveling companions. For some unknown reason it also seems to have an absorbent quality that makes it the perfect accompaniment to a warm can of Fosters at 7am in the morning.

Walls’ Microwaveable Sausages – the single man’s ideal pre-match meal. I lived off these for the first

week of Alex’s life when he and Helen were still in hospital and I more or less lived in the pub. Four of these beauties would nuke from frozen in the microwave in under two minutes and thirty seconds, giving you just enough time to butter the four slices of bread and make a brew. They tasted absolutely shite but provided exactly the right blend of heat, stodge and time-saving nutrition. Apart from the nutrition bit. Walls stopped making them a couple of years ago. Quite right too, they were a fearful creation. 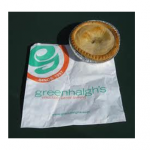 distributed between slices of heavily buttered thick, white bread and eaten as a butty. Oh, and washed down with a steaming mug of tea, of course. My personal choice would be for a meat and potato and a beef steak combo from Greenhalgh’s. But, it really is down to personal preference, and I would never dare to tell a Wiganer what type of pie he or she should eat. It’s what makes us different as Wiganers. It’s probably the only thing that does, sadly.

Have I made you feel hungry? Well, it must nearly be lunch/dinner time by now? Go on, stick the kettle on and pop a couple of those Walls’ sausages into the microwave. You know you want to.