I’m quite a busy lad these days, as you may have surmised\been relieved by my recent lack of 54Fridays and general blogging. Well, what can I say, I really like my job and it keeps me gainfully occupied for the vast majority of the time.

However, this week, a number of things have driven me to distraction and released my inner Meldrew. To be honest, all bar one of the following rants are fairly regular occurrences in my life. It’s just that this week’s virgin whinge got me so wound up, it launched me into full, classic “And another bloody thing, while I’m at it…” mode.

So, if you don’t know how to behave in a gym, on a motorway or on Facebook or phone into to talk radio shows, you should look probably away now.

Locker Room Loonies – four days on, I am still completely incredulous at what happened at the gym on Monday morning. You’ll need to refer to the highly sophisticated “graphic” to fully appreciate this. I had showered and had removed my bag from the locker 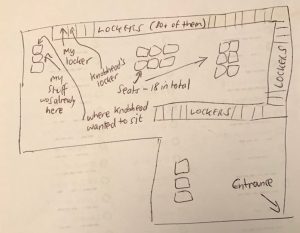 There was no one else in there. Enter Mr Weird who marched over the where I was stood – in my best birthday suit – and moaned that the locker that he wanted, ie mine, was occupied. Maybe he couldn’t see the other 49 empty lockers spread around the perimeter of the room. I assumed then that he would just move along. He didn’t. “Excuse me, can I just squeeze in there?” he said, pointing to the seat tucked away right in the very corner next to my bag (see graphic, come on, pay attention!)

Was he taking the piss? There were 15 other seats he could have comfortably sat at without having to sit there with my damp arse wafting in his face for the next five minutes. Because did I move to give him some space? Oh no, not only did I not move, I took longer than I have ever taken to dry myself.  It was positively tantric.

Slalom Swimmers – right, here’s the deal. If you’re lucky enough to get in the pool when there’s no one else in, pick your spot and start swimming up and down the pool from there in a straight line. You’re entitled to keep doing that all day long if you wish. If, like my gym, there is a weird-shaped pool and only the curvy parts are free when you get there, well that’s just tough! Don’t start encroaching in my virtual lane. Here’s a tip for you – get up a bit earlier like the rest of us do. Oh, and learn how to park that ridiculous turquoise BMW because yes, I know full well that’s your car sprawled across two parking bays every morning, you absolute tool!

Late flashers – talking of idiotic drivers… Admittedly, it’s been a while since I took my driving test but I’m pretty sure I was never instructed to wait until I have made my manoeuvre before signalling my intent. What is the point of ambling across two lanes of motorway and then whacking on the indicator once you’ve arrived at your destination lane? Perhaps the driving test is different these days. “Now sir, do you ever intend trying to join the M56 from the M6 at Lymm? If so, on no account should you ever give your fellow motorists even the slightest clue as to whether you are heading towards the airport or Chester. Just leave your lane hop until the very last, most dangerous moment and never be tempted to indicate under any circumstances”.

Who are you #1? – it’s almost a relief to get away from the stresses of the gym and the motorways and enjoy a nice, relaxing Facebook stalk. Now, I realise I am on thin ice here, complaining about people who post shite on Facebook; stones and glass houses, and all that. However, at least I try to make my post amusing. I may fail miserably, but at least I try. What has been winding me up this week is people who check-in somewhere and don’t post any comment to go with it? How dull is that? David Dullard is at the Dog and Duck. Great, so frigging what?! And don’t even get me started on people who go “live” on Facebook. Who do you think you are, James bastard Corden?! Seriously, nobody is interested in watching you buy a pint of Fosters or in watching you watch some no-mark singer warbling at some crappy open mic night, so just stop it already!

Who are you #2? –  The producers of BT Sport’s Premier League Tonight show clearly think their studio guests are crap (they’re right) because they ask members of the public to send in selfie videos giving their opinions of the match they’ve just watched. I couldn’t give a flyer what Stevie G thinks of the game, let alone what some coked-up, Stone Island-clad adolescent wannabee hooligan has to say about it. What possesses anyone to think that anyone else gives the remotest flyer that you, Mr Bellend, thinks that it’s “time for Keoman\Wenger\Klopp (delete as appropriate) to leave my football club”? It’s wonder the television screen has remained intact this long.

I really need to chill out.

See you on the yoga mat.