Last September, I had what was to be the first of several stays in the Beacon Hotel in Sandyford, Dublin. It sells itself as a ‘boutique’ hotel and, although it’s a little bit Bohemian, it’s a great hotel. All the rooms are kitted out identically, with one of the main features in every room being a dark brown fake fur throw – or comforter, as I think they are officially called these days, though to be fair, I just call it a rug – which is laid out on the pristine white sheets and duvet as you enter the room.

It struck me as the sort of prop that might be used in some sort of soft-porn model’s photo shoot. Being thoroughly 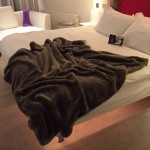 bored that night – there was no Champions League on TV that night – I inexplicably attempted to pass the time by recreating such a pose armed only with a mobile phone, a mirror and seriously dodgy, lighting. Even more inexplicably, I posted the final results – albeit to my Friends list only – on Facebook.

Unsurprisingly, that photo soon found its way to our Thursday Night Football (TNF) WhatsApp group, one of the most ruthless forums in the world for banter and piss-taking.  So, not at all unsurprisingly, I was ripped to pieces for weeks, ridiculed for both the concept and content of the photo.

As the months wore on, although the banter continued mercilessly, a certain morbid interest in the idea developed.  It was a constant topic of conversation. Benno, the self-proclaimed comedian of the group created his own mickey-taking version in a Blackpool hotel. Clayty went even further trying, and failing miserably, to copy the sophisticated mood of my original effort. Eventually, it became something of a badge of honour – you were nobody at TNF if you hadn’t posted your hotel rug shot to the WhatsApp group.

Now it’s fair to say we have a shocking record at TNF when it comes to dreaming up hare-brained schemes that rarely ever get off the ground. In this vein, someone had the bright idea of putting all these rug photos into a calendar, perhaps raising money for charity. Amazingly, although it is now almost March, said calendar is in production and available to buy. It costs £5, plus £1 if we need to risk the vagaries of the British postal system, and all proceeds will go to Prostate Cancer UK, a fitting charity for a bunch of middle-aged male wannabe-footballers.

You can read more about the project at www.chrisgriffinsays.co.uk/furfakessake or you can go directly to the order form, if you’re already convinced. To get you in the mood, here is a little taster of what you can expect to see staring back at you over the next twelve months. No pictures here, though – you have pay to see that!

Griff – As I had no pre-conceived idea where I was going, if anywhere, with this photo at the time it was taken, I am the only one of the group who attempted a basic selfie via a mirror. I am probably also the only one who moved a six-by-three foot free-standing mirror to a position directly in front of the bed then neglected to move it back to its original location the following morning. I have no idea a) what the maid thought had been going on and b) how I managed to get a reservation for the following week.

Benno – Always the joker in the group, Benno took his own individual take on the genre which did, to be fair, include a hotel room and a comforter but wasn’t exactly what we had in mind. His effort was more Turin Shroud than porn-star pose, if truth be told. He did redeem himself in time to become an admirable Mr. December, though

Clayts – Clayty’s competitive nature (I hesitate to say competitive streak) was always going to see him make bid for the ‘best’ of the twelve efforts. He ticked all the boxes in terms of location and dress-code, though his choice of ‘rug’ left a bit to be desired. He is still yet to convince us that his costume is not his mother’s spare bedroom curtains.

Vinny – Always the voice of reason in the group, Vinny was never going to go rogue. His effort was always going to comply with every stipulation, term and condition. The location, pose and accessories were text book. All that let him down were the raw materials with which the Good Lord provided him, but he can hardly be held responsible for that now, can he?

Pagey – our favourite (only?) ex-pat, Aussie-dwelling ex-regular TNFer blatantly ignored the rules and guidelines in providing his contribution. However, given that he was contenting with temperatures in excess of 40 degrees and the fact that he has almost perfectly recreated one of the most iconic sporting poses ever, we will let him off. Intrigued to see what he did? Well, dig deep and buy the calendar and you will see. It is definitely for a great cause.

See you at the online ordering page – Griff