Barely a week goes by without someone, somewhere campaigning for at least a limited return to standing areas in football stadiums. It’s still a very emotive issue, given that the fall-out from Hillsborough is still l rumbling on and will probably never go away. As an aside, I had an operation on my knee two days before the Hillsborough tragedy but I’ve stopped talking about it now. I do accept, 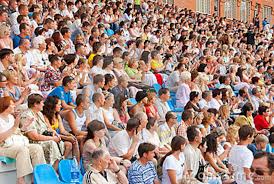 It also explains why there is some reluctance on the part of the authorities to accede to the campaigns of groups such as the FSF (Football Supporters Federation) to bring back safe standing and why a healthy debate continues to rage.

There are many considered and sensible arguments for and against the return to terracing. Far be it from this blog, however, to position itself anywhere remotely close to any ballparks marked considered or sensible. To be honest, I can take it or leave it. As long as the pub is open before the match, I personally couldn’t care less whether I have to sit, stand or form a human pyramid for ninety minutes.

That said, as it has been a hot topic of debate in Football Message Forumsville this week, here are my top five reasons in favour of sitting at football matches. Next week, I will present an alternative case for standing. Much like Andy Carroll’s recent appeal of his red card against Swansea, both these cases will be mostly frivolous in nature.

Beefy Goodness – Sometimes, it can be a right old chore watching Wigan Athletic. There are times when you need something to relieve the boredom. Until Mo forgot to renew his West Stand season ticket in good time one year, he sat in a seat in the row immediately below us. In days gone by, we would frequently pass the time during particularly tedious passages of play by childishly filling the hood of Mo’s jacket with dirty napkins, bits of hot dog, toffee wrappers and empty Bovril cups. Oh, how we laughed! Sadly, it is much more difficult to do that when you are stood on terrace steps, even when your target is someone as short as 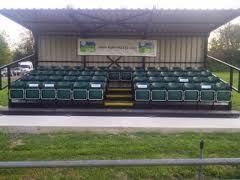 Play to the whistle – Answering the call of nature is much simpler in an all-seater stadium. On the terraces, it was often a bit of a bind pushing your way through the huddled throngs (as a Wigan fan, I am clearly using my imagination here) and even more difficult navigating your back to your original spec afterwards. The same scenario applies when you have foolishly timed the pre-match round-buying so badly that it is your turn to go and buy the half-time ales. This does, of course, very much depend on where you sit in the row. If you sit in the middle of a forty of fifty-seat row it is harder than if you sit towards the end of a row. Or better still, at the very end of a row. Like I do. “Down there for dancing”, is the appropriate phrase, I believe.

Restricted View – Having everybody parked in their own individual seat undoubtedly makes the viewing experience more enjoyable. I am neither particularly tall nor particularly short and so I never really suffered the terrace terror of being stuck behind some 6ft 8” lummox and having to peer around either side of him – or her, I suppose – in order to see the action. However, I do sit next to a 6ft 3” lummox and, although I can see perfectly well, because he has thighs like Piper Alpha it can still be a bit of a tight squeeze, alleviated partially by the fact that I sit on the end of a row (see above for downstairs dancing foresight). This doesn’t spare me the effects of his constant leg-twitching, however, which makes the whole row vibrate like Katie Price’s rabbit.

Sign-him up! – Who hasn’t dreamt of heading a Row Z clearance back down on to the pitch and maybe getting two seconds of fame on Match Of The Day in the process? Since the advent of the Roberto Martinez brand of tippy-tappy, tika-taka football, those opportunities at Wigan are now few and far between. Also, as we sit very much towards the back of the stand it is rare that that the ball ever ventures so far back, especially now that Titus Bramble is no longer with us either. When the chance does present itself, it is much easier to achieve this in all-seater stadia as it is difficult for others to invade your space. I am extremely proud to announce that I once managed to perfectly chest-down a Bramble clearance and volley the ball – left-footed, no less – back down on to the hallowed turf. In reality, this had 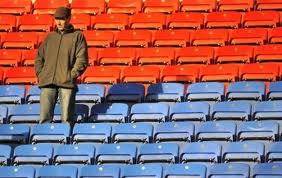 Storage Solutions – There are obvious comfort-related benefits to sitting in a – albeit – plastic seat as opposed to standing on hard, crumbling concrete for two hours. Having your own personal seating space opens up all kinds of storage options, for example, particularly in the void beneath your seat. This can be used to house Bovril cups, a match programme or maybe your hot dog, temporarily of course, whilst you take a swig of the afore-mentioned Bovril.  I have no idea why I would consider this a benefit as I never, ever buy any of these items at the match. I buy beer now and again, but you are prohibited from taking that back to your seat in England. To the best of my knowledge, I have only used the under-seat storage twice, once to hold my coat and once to store a copy of the Mudhutter fanzine I bought on the way into the stadium. Both items were subsequently and inadvertently left behind at full-time. Because I sit on the end of a row (did I mention that?) they were in full view of the departing hordes and, consequently, when I went back to collect them, on both occasions, said items had been nicked.

See you in the stands – Griff