After a long, hot (mostly wet, really) summer, it’s good to have the football season back. It’s only been about twelve weeks but it seems an awful lot more. Saturdays simply aren’t made for shopping, creosoting fences and housework. Of course, as I rarely partake in any of those three activities, a lack of football for three months therefore tends to make for a very empty time indeed.

There are obviously sports to watch other than 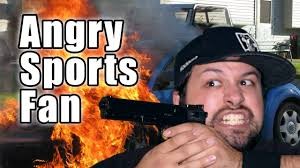 football during the summer months, but it’s just not quite the same. Rugby League now takes place in the summer time, but it takes me most of the season to work out what the new play-off/promotion and relegation rules are and why Wigan have played St Helens fifteen times in three weeks.

So, it’s good to be able to go watching football again, even if it is only Wigan Athletic and even if we are now plumbing the depths of League One. And as well as getting used to watching a lower standard of football, it will not surprise you in the least to learn that there are many things – usually people – that really piss me off when watching football. There are even more things with other sports. Here are five of them.

Exit strategies – I don’t claim to have the biggest and best bladder in the world, though I’m not sure why I, or anyone else, would ever want to make that claim anyway. However, regardless of the amount of pre-match beer consumed, I can always manage to get through 45 minutes of a football match without having to get up to pee. If you can’t, then I suggest that you change your drinking habits. Or buy a 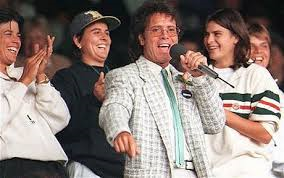 seat at the end of a row, like me, so that you don’t disturb anyone. Particularly, me.

Mexican wave – Whoever invented this nonsense needs shooting. Thankfully, it seems to have died a death these days in most sporting arenas. Except tennis, that is, and why am I not surprised at that. Any sporting crowd that is happy when the authorities wheel out a warbling Cliff Richard to entertain them during a rain break should be eyed with utter suspicion. Still, these are the kind of people who giggle like schoolgirls if a ball-boy slips or a line judge gets hit in the nuts by a stray back-hand. A tennis crowd is nothing that a well organised ISIS/Al Qaeda campaign wouldn’t sort out in no time at all.

Amateur umpires – I’ve had some of my best ever sporting days out watching cricket. The crowd is generally knowledgeable and good-natured, despite becoming gradually more clattered and boisterous as the day wears on. And I mean nicely drunk, not badly, obnoxiously drunk. As usual though, there are the odd few who have to take it one step too far. Nope, I don’t mean the guy who constantly abuses the Aussie bowler fielding at third man – who would ever tire of hearing that? No, it’s the guy who insists on standing up and flamboyantly, not to mention drunkenly, signalling a four or six despite the fact the real umpire has just done it perfectly adequately. Sit down mate, no-one wants to see it! Apart from the Sky Sports producers, it would appear, as they insist on showing some buffoon making an arse of himself every single time the ball thuds into the boards for another boundary.

Pub games – I hesitate to call darts a sport, but what constitutes a sport is an oft-debated question and I am not going into that now. Save to say that, whatever does define a sport, darts surely can’t be one, can it? I know the players no longer get pissed while they are playing but that is more than made up for by the neanderthal, chavvy crowds that turn up to watch. I say watch, but what is there to actually watch? Even with front row seats, it’s impossible to see what is happening. So the punters end up watching on the big TV screens, holding up badly composed hand-written notes for the Sky Sports producer to broadcast over the airwaves. I 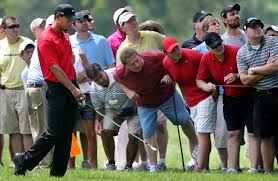 wonder what qualifications are required to become a Sky Sports producer? Surely it can’t be that rigorous a selection process?

“Get in the hole!” – Now then, you rarely get that kind of rowdy and drunken punter at the golf. Maybe you do in the corporate hospitality tents but not out there on the course itself. What you do get, is a bunch of pompous know-alls who appear to have super-hero vision and be on first-name terms with world superstars. Unless you are stood directly behind a golfer as he tees off you have very little idea where the ball is going until it lands. Yet the amount of times someone stood fifteen yards way, and underneath the flight path, yells “Great shot, Tiger” (not so much these days, I guess) before the ball has even left the club-face is unbelievable. If you‘re ever stood next to one of these idiots, especially if he follows it up with a bellowed “You de man, Tiger!” you have my full permission to kick the shit out of him.

See you on the golf course – Griff