My Facebook page keeps telling me that I haven’t posted anything from Chris Griffin Says since last November. Oh, you lucky, lucky people! Since the turn of the year, I have been meaning to get back on the 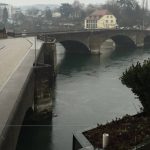 horse, at least the 5-4-Friday horse, but something has always got in the way.  So, having found myself with a couple of days off work and a little bit of time on my hands, I thought I’d tell you about my week.

For the early part of this week, I was working in Switzerland. Nothing unusual in that you might think, though having been lucky enough to have done a lot of travelling with work over the years, this was the first time I had ever visited this particular country.

I wasn’t expecting to be surprised, but I was. A little bit.

To time – One thing we all know about Switzerland is their attention to detail and the obsession with timing. So I was little surprised, therefore, when standing at Basel railway station on Wednesday, to hear over the station tannoy that the next train to Lausanne would be delayed by two minutes. He apologised profusely, of course and there was an audible intake of breath on the platform. Cleaners stopped cleaning, buskers stopped busking in complete astonishment. I fully expect someone to have been sacked over this appalling tardiness.

Two countries – My hotel was in a town called Rheinfelden, sitting right on the majestic River Rhine. 100 yards away, across a bridge was the other side of Rheinfelden, which is in Germany.  It’s the same town but it’s in two different countries, one in the European Union, one not. I paid for a beer in the German part of town with Swiss Francs (I forgot I’d emigrated) and received change in Euros. This well and truly battered my head. At least both sides of town are in the same time zone. Well, I think so, anyway –  I lost an hour working out how much that beer had cost me.

Two francs – At Euston Station in London it costs 30p to have a pee, if you get my drift. At Basel station? 2 Swiss francs, which is about £1.59! There are some rough pubs in Wigan in which you can fill your bladder to bursting for £1.59. Not so, in Swiss and/or Germans bars in Rheinfelden. The aforementioned beer in the German sector on Monday night cost me 10 euros. And it wasn’t even a full pint.

Too quaint – For all of the above the people in Rheinfelden and Basel are some of the friendliest, most polite people I have had the good fortune to meet. It’s quite a sleepy place 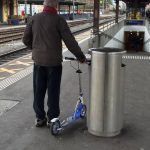 and seems to have been modelled on the town of Duloc from the Shrek films. I also came across the oldest scooter boy in the world too, as you can see in the picture on the right. Life seems to move at a much slower pace in Switzerland than most of us are used to.  Which is why I was surprised to see…

… Too rude – the names of the two establishments pictured below. Perhaps something has been lost in translation, though the restaurant name (the one on the left, if you were wondering) didn’t leave much to the imagination. 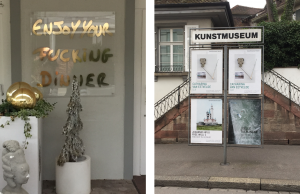 See you at the Rathaus – Griff