Given the ease with which almost any kind of shopping can be done online these days, the need to physically trog around shops is nowhere near the necessary evil that it used to be. Which is a good thing, because I hate shopping – unless I am buying for myself, of course. However, there are one or two shops from my dim and distant past that hold some happy memories. You will need a rudimentary knowledge of Hindley, Hindley Green, Wigan and Stockport to know these shops personally, but if you don’t know the areas you will still be able to relate to the sentiment. 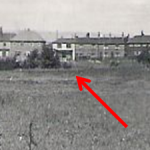 My granddad lived at the junction of Atherton Road and Long Lane in Hindley Green. On one corner of the junction was the Victoria pub and, on the other corner, Harold Grimes’ corner shop. My granddad lived next door to this shop. You could get most things in Harold’s shop, and I particularly remember the Penny Tray from which you could pick sweets like cola bottles, Refreshers, Fruit Salads and Black Jacks. The shop also had a huge meat slicing machine at the back of the shop and I would spend hours watching Mr Grimes slice cuts of ham, beef and other meats. Life was really, really slow in Hindley Green in the seventies. I have it on good authority that the white building in the centre of the picture is Harold Grimes’ shop but it was taken well before my time.

The Dolphin Chippy – Three things always happened when I went to swimming lessons at Hindley baths. Firstly, I would feign illness or 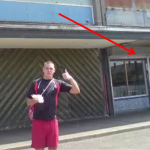 injury in an effort to get out of the lesson because I hated it, always without success. Secondly, after the swim, we would buy some chocolate covered peanuts or a Bar Six chocolate bar from the vending machine in the corner of the foyer. Thirdly, if we were lucky, we would get some chips from the Dolphin Chippy at the end of the row of shops adjacent to the baths. It always seemed to have the best chips in Wigan but it may just have been the swimming–induced hunger that made that it seem that way. We would probably have eaten a raggy cat at that point. Sadly, as you can see from the picture, the Dolphin and the other shops in the parade have now gone. Incidentally, I have no idea of the identity of the guy in the foreground, but with his pink-trimmed t-shirt, pink shorts and what appears to be a pink ruck-sack, he is clearly very comfortable with his sexuality. 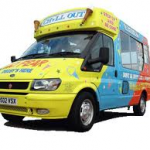 Back in high school, each week we bought dinner tickets for use in the school’s dining hall for lunch. The tickets cost 25p each which was enough to buy you a decent, nutritious meal each day. However, that wasn’t enough for some kids who would want to buy extra tickets to buy extra food. There was no shortage of willing sellers, me included. I would regularly sell my tickets and, instead of eating a proper lunch, would go to Sarah Lynn’s pie shop and get myself a meat and potato pie on a buttered barm cake. Other days, particularly when the weather was nicer, lunch would consist of a Twix and a 99 cone from the ice cream van. It is little wonder that I only weighed seven and a half stone when I left high school. Disclaimer: I’m not sure that the ice cream van in the picture is the actual one that used to rock up in the school playground each day. 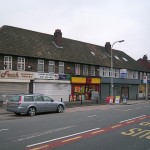 There’s a pattern developing here. This, clearly now abandoned, parade of shops was on Didsbury Road in Heaton Norris, Stockport and was at the end of the street where I lived for 5 years in my mid-twenties. It was a bloke’s dream row of shops. In geographical sequence, there was a newsagent, a Chinese takeaway, a bookies and an off-licence. To recover from these excesses there was also a doctor’s surgery. Finally, as if to provide some female ying to the male- dominated yang, there was a shop at the very end of the row that sold accessories for vacuum cleaners and washing machines. Joke, sisters! 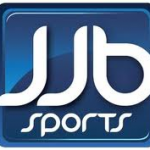 growing up in Wigan, in the early seventies there were three main sports shops. Robinson’s and Oliver Somers were on Market Street and JJB was on Mesnes Street. JJB was always my favourite mainly because my granddad used to work there when he was young, no better reason than that. Obviously, as the years rolled by, JJB, then owned by Dave Whelan, took over not only the Wigan sports shop scene but also that of the whole country. When Whelan bought Wigan Athletic in the mid-nineties and JJB sponsored the stadium and club, I embarked on a policy of buying all my sports gear from there in the misguided hope that my meagre contribution might be added to any transfer funds for buying new strikers and other footballers. Only when Whelan sold JJB did I venture away from and start to shop in other sports stores. It is all academic now as JJB has gone the same way as the Dolphin Chippy, the Heaton Norris shops, Harold Grimes’, Sarah Lynn’s and the Cardinal Newman school playground – all defunct, derelict and destroyed.