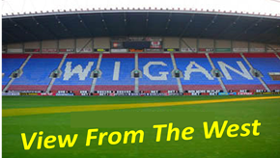 So, last Saturday, Queens Park Rangers won the so-called £135 million football match at Wembley to clinch their place in next season’s Premier League and bring the curtain down on another domestic football season. I know there is the small matter of the League One and Two playoffs to complete but, to all intents and purposes, the season is now over.

I get the impression that most neutrals were rooting for Derby County yesterday and feel a general sense of injustice that the financial recklessness at Queens Park Rangers has been rewarded with a place in the Premier League. There will be some indignant wailing and no doubt the odd set of teeth will be gnashed over the next few days but then most fans will settle down to enjoy the close season.

And to what do we have to look forward?

Well, there is the small matter of the World Cup in Brazil, starting on June 12th for a month. Before that starts, there will be two and a half weeks of media nonsense and hype as film crews and print journalists hand aground the England camp in an attempt to fill the back pages and the screens of the rolling news channels.  They will report every slip, scratch and strain suffered by our pampered players out in Portugal and be desperate for a sighting of John Terry out on the town with one of the squads’ wives.

Thankfully, before long, we will have the football itself to worry about, as we attempt to be the first European team to win the World Cup on South American soil. It is a tall order for even the best European teams and it is widely accepted that this current England team is not one of them.  I think getting through a favourable second round draw before meeting with glorious failure in the quarter final is about the best we can hope for. And to be fair, that wouldn’t be too shabby an achievement given the pool of players at our disposal.

About one week into the tournament, the league fixtures will be announced for next season and so we can begin to plan the Boxing Day fancy dress outfit and hope for an August or May trip to the seaside to play Blackpool.

Then, about two thirds of the way into the tournament, falls the end of June, a time when we traditionally gain a bit more clarity on which players are having their contracts renewed and who will be looking for a new club. Transfer speculation will crank up and build all the way up to the start of the season and beyond.

Where Wigan Athletic is concerned, there may well be a requirement for a revolving door to be installed at the DW Stadium.  Most, if not all, of the loan players we had this season will return to their parent clubs and we have quite a few senior pros out of contract (including the mercurial Jordi Gomez) and yet to reveal their planned whereabouts for the coming campaign. With the relatively new manager no doubt keen to stamp his mark on the squad, there may well be a great deal of coming and going at Wigan Athletic this summer.

So, enjoy the break from football. Such as it is, anyway. The first set of Football League fixtures is on 9th August. It won’t be long now.