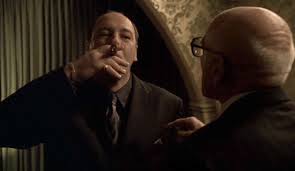 and watching an old episode of The West Wing, Mad Men or The Sopranos, it probably isn’t that uncanny at all. Still, a couple of weeks ago, as Junior Soprano berated his nephew for not predicting that the Feds would be bugging his house, Tony retaliated by asking: “So who are you all of a sudden anyway, The Amazing Kreskin?”

I very much doubt that Tony’s daughter, Meadow Soprano, would have had any idea what her dad was talking about but, for me, it brought back some quite vivid memories of watching afternoon television back in the early seventies. Mind you, at seven or eight years of age, I wasn’t drinking quite as much wine as I do these days which might explain why I can remember it so clearly. I have, as usual, relied on Google and Wikipedia to back up my fading memory. Let’s start this week’s rambling with the show that triggered all those memories in the first place…

Canadian TV between 1970 and 1975 that was syndicated in the US and Britain. He never claimed to have paranormal or clairvoyant powers, most of the time he simply made predictions. However, I wouldn’t like to have been in a betting syndicate with him because he had a pretty poor record for someone who was supposedly making a living out of it. He would often have the cheque he received in payment for the show hidden amongst his audience and then attempt to find it, something he failed to do on nine occasions. He was certainly no Derren Brown, but I do remember being glued to it most afternoons as a kid. In later years, he attempted some wild predictions related to UFO sightings designed to support his theories about group persuasion with very questionable levels of success. He has also officially changed his name to The Amazing Kreskin? How amazing is that? So, no, I don’t think he his any kind of Derren Brown, not even a Paul Daniels. If anything, he is more David Icke.

The Galloping Gourmet – You can barely turn on any of the hundreds of television channels that exist these days without seeing some attention-seeking chef poncing about on some cookery show or other. Ramsay, 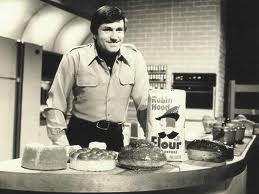 Pierre-White, Blanc, D’Acampo, there’s a whole army of them out there. But before all of that lot though, there was Graham Kerr, aka the Galloping Gourmet. Between 1969 and 1971, Kerr, a Londoner, filmed a show in Canada that was aired throughout North America and the UK. He started every show by galloping through the audience (see what he did there?) and ended it by grabbing an audience member, usually a woman, to help him eat whatever slop he had cooked. Not once did he ever tell anyone to “F*** off!” No wonder it only lasted two years. After a three year absence due to injuries he suffered in a bad car crash and a serious illness for his wife, he returned for a daily five-minute slot called Take Kerr (see what he did there, too?) but it only lasted one more year. He should have told a few people to “F*** off!” – he would probably still be on air today.

Crown Court – What a dull, yet surprisingly compelling, programme this was that aired in the early seventies. A court case was played out in three, thirty minute episodes over three days in the fictional town of Fulchester. The judge, barristers, clerks, defendants and witnesses were all actors but the jury was drawn from real members of the public. The first two days would be given over to the

prosecution, the final day to the defence team. No matter how riveting the story line may have been, ninety-five per cent of the scenes were shot in the courtroom and the production was as staid and serious as a real courtroom would be. Believe me, in terms of quality and excitement, Crown Court didn’t even come close to today’s legal dramas such as LA Law, Suits or The Good Wife. There was no shagging in it, for a start. That said, if I was ever off school, I’d make sure I was watching. I think we must have been very easily pleased in those days. Some of the UK’s more notable thespians cut their teeth in Crown Court including Colin Firth, Brian Cox, Ben Kingsley, Robert Powell, Tom Conti and Mary Wimbush. Actually, I have never heard of Mary Wimbush, but I wonder if she is related to Wendy Wimbush. Wendy Wimbush was the name of the women who kept the scores on the BBC cricket coverage in the seventies and was the innocent subject of many an infantile joke amongst my school mates just for having such an hilarious name.

Crossroads – Following my tongue-in-cheek pop at Neighbours in last week’s Australian 54F, I was accused of being “racist and f****** offensive” by one of my regular, now ex, subscribers. I am therefore a bit wary of having a pop at Crossroads for fear of being labelled West Midlandist. However, 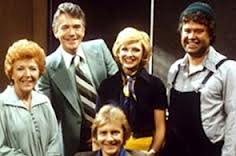 I will because it was shit. There was better acting in Thunderbirds, yet it gained cult status and seemingly ran for ever. It started in 1968 and was still boring the life out of us in the early eighties. When the Head of Programming sacked Noele Gordon, who played Meg Richardson, the motel’s matriarch and winner of countless Female TV Personality awards, there was a national outrage and the man in question, Charles Denton, became a hate figure. A hate figure! Over a Brummie soap opera! Really? He should have been sacked himself for not providing subtitles so that we could know what they were saying. Now, for anyone taking offence at this provincial stereotyping, there is an unsubscribe option at the foot of the email you received and the Book Store section of my website now stocks sense of humour chips.

Indoor League – What a gem of a programme this was, and what a genius idea! It consisted of a bunch of blokes 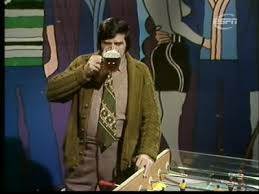 playing pub games, recorded in The Queen’s Hotel in Leeds. They played bar billiards, table football, pool, arm wrestling and, of course, darts. It was hardly surprising that darts was included as the show’s original producer was none other than Sid Waddell, the man who would go on to become the voice of TV darts and who sadly passed away last year. The show was presented by Fred Trueman, as dour a Yorkshire man as they come, who nursed a pint of bitter all through the show, never smiled and ended every episode with a cheery “Ah’ll sithee”. How quaint, but we are talking Yorkshire folk here, I suppose. Go on then, you miserable Tykes, take offence at that! Well, those of you that can read, at any rate.