I haven’t done an original 54F for a couple of weeks now as I have been traveling quite a bit with work. Many of you who know me will know that, in the past, I used to travel quite a lot and became quite snobby about air travel and highly intolerant of infrequent flyers, in particular. I’d forgotten all about most of the things that used to amuse and annoy me in equal measure. So, here are some of them again, along 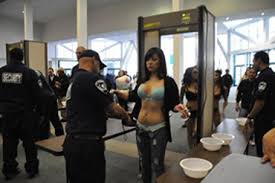 with a couple of brand new observations, fresh for 2015.

Security – Passengers in the security line never cease to amuse me.  We all know you have to remove your belt and jacket and stick your phones and lap tops into a separate tray to go through the x-ray machine. We know this because there are signs everywhere and security staff constantly tells you that’s what they expect you to do. However, I have never seen any security team anywhere in the world tell you that you have to start taking out all your electronic devices when you are forty minutes away from the front of the queue. I’m pretty sure they are happy for you to start the process once you are actually at the conveyor. I swear some people start removing lap tops and belts before they have even paid for their taxi.

Seat belts – Now, everybody knows that when the fasten seat belt sign comes on you have to, well, fasten your seat belts. People stress about this because a) it means you can’t get up for a pee until they are switched off again and b) if we drop out of the sky from 34,000 feet, that little belt is expected to prevent you picking up any cuts and bruises when you hit the ground. What a totally futile exercise, yet everybody panics like billy-o to get back to their seat so that they can buckle up in time. I love seeing the look on the face of the woman who 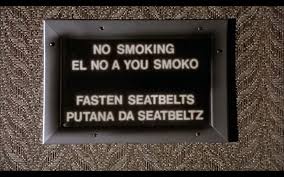 has just got to the front of the loo queue when the lights go on and she has to hobble back to her seat, cross-legged, with a face like thunder.

Overheads – I have to say I’m a bit anal about boarding a plane fairly early, particularly on one of those catapult planes from Dublin or the Isle of Man that has the properties of a tube of toothpaste. However, that is only to ensure that I find a decent space for my bag in the overhead bins so that I don’t have to squeeze it between my legs under the seat in front of me for the duration of the flight. I don’t, though, get all bent out of shape and upset if I can’t put my bag in a bin directly above my personal seat. I’ve seen people complain bitterly that they’re sat in seat 4D but have had to put their bag all the way across the aisle and back a little bit behind them above seat 5C – miles away! – but then not even make an attempt to touch said bag until we’ve landed at the other end and are about to get off.  Why moan if you don’t need the bag in the first place?!

Orderly Exit – Items 4 and 5 this week are new ones to me and both happened on recent flights in the US. Firstly, I flew into Omaha from Atlanta, arriving close to midnight local time after having spent been up since 5am, plus losing an extra lost six hours due to time zone changes, traveling from Manchester. 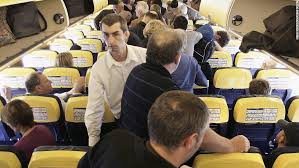 So, being totally goosed and pissed off after 25 hours awake, I was in no rush to leave my seat halfway down the plane knowing that I still had a case to wait for – hopefully – in baggage reclaim. Suddenly, I looked up, and there was no-one getting off although every row in front of me was empty. I looked aft, and it dawned on me that everyone behind me was patiently waiting for me to get off because it was my turn! That never, ever happens on a European flight. In fact, I thing it must be a polite Omaha thing, because it didn’t happen in Atlanta on the way home and I’ve never seen it happen anywhere before either.

LAX security – I don’t actually mean LAX as in Los Angeles, I mean lax as in can’t be arsed doing things properly. In the line for security, again at Omaha, I was ushered down what was apparently called the ‘pre-check’ line. I didn’t know what this meant, but it was a much shorter queue so I was cool with it. I started to remove my belt and take out my lap tops – obviously only once I’d reached the conveyor – when the security woman yells “no need for that sir, you’re a pre-check. A pre-check!” I guessed this meant there was more security to be encountered further on but, before I could even buckle up my belt, I found myself stood at the departure gate. I board the place, get to Atlanta, and arrive back in Manchester without so much as seeing another x-ray machine. It appears the pre-check line was a perk associated with my class of ticket. So, if you’re an ISIS, ISIL or whatever-you’re-called-these-days would-be suicide bomber, to cause maximum airborne terrorism, I suggest you start all your journeys at Omaha’s Eppley airfield – because you appear to be able flout any anti-terrorism flight rule you like there, provided you pay a little bit extra to sit in a seat with a bit more legroom. Handy for storing that oh-so important ruck-sack, I guess!

See you in paradise with 76 virgins – Griff