This blog has reached you via one, or more, of three possible routes:-

b)    You follow me on Twitter @griffv103. If so, then you are among a very select band of hardy followers. Would you all like to come round for tea on Sunday, I have plenty room for the few of you that exist?

c)    You are one the 325 people who have already liked my Facebook page (which is at www.facebook.com/chrisgriffinsays and, if you haven’t already liked it, please do) and get force-fed this rubbish on a weekly, and sometimes more often, basis.

Enough of the plugs (then again, I do have a new book coming out in the next few weeks – stay tuned, folks!) but if you fall into category c) above, and you aren’t addicted to Candy Crush, the chances are you will be aware of the game app that has sparked this week’s mild rant.

I have an app on my iPhone called “4 Pics 1 Word”. The game presents you with four pictures, all of which are intended to depict the same word. You are told how many letters the word comprises and are given twelve letters from which the word is made. 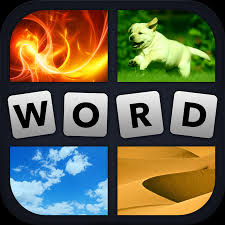 As you successfully identify words, you can earn coins which you can use with further clues to either reveal specific letters and their position in the word, or to discard redundant letters.

I am quite good at this game. I have now solved over 1850 puzzles and have earned over 1800 coins. I am not bragging, as it isn’t a particularly difficult game to master. I tend to dip in and play it when I have a spare moment, usually when I visit the “smallest room in the house”, if you get my drift.

However, every now and again, a puzzle will stump me. I can stare at it for minutes on end and, despite the clues clearly pointing to a specific subject or theme, struggle to put my finger on the actual word. I get so frustrated that I even spend some of my coins, something I loathe doing. And then, the word becomes obvious, and I almost throw the phone against the bog door in a fit of pique.

Yesterday that happened to me with two words. And why couldn’t I get them as quickly as usual, you ask? I’ll tell you why, because the game was looking for a stupid, incorrect American spelling of the word in question, that’s why.

Now, I need to be careful here because the last time I criticised a different nation in one of these blogs – Australia, in that particular instance – I lost a very irate and indignant subscriber. With a new book coming out, that’s the last thing I want to do. However, here goes. This needs saying. I am going to have a pop at the Americans and their annoying insistence on screwing up the England language.  It won’t matter. Most of them can’t read anyway. They pronounce everything incorrectly, they spell numerous words incorrectly and their general use of our language is just plain wrong.

Here are five abominations of our language perpetrated by our Yank cousins across the pond. These five came to me without giving it too much thought at all, to be honest – “right from the get go”, as they might say in Ohio. I’ll start with the two that threw me completely in my 4 Pics 1 Word game yesterday.

Curb Your Aubergines – The first puzzle that stumped me consisted of four pavement-related pictures.  The absence of a letter ‘p’ anywhere near the anagram, however, convinced me I should be looking for something other than ‘pavement’ and so ‘kerbside’ immediately sprung to mind. Yet there was no letter ‘k’, either. It took me fifteen minutes to realise they were spelling it as ‘curbside’. How very annoying. On the next puzzle, four pictures of an aubergine appeared, and even a culinary lightweight like me recognised it for what it was right away. However, they were only after an eight-letter word and, after discarding four letters at a cost of 160 coins, I still couldn’t make aubergine fit. Until, of course, I remembered that the Yanks call an ‘aubergine’ an ‘eggplant’. Why? What is wrong with the original Gallic word? No wonder the French hate them, too.

Where are U? – Is it incompetence or just pure laziness that leads the Yanks to omit the letter ‘u’ from many of their – sorry, our – words? How much longer can it take to type colour rather than color, labour rather than labor? Come on, do me a favor, please! It’s not hard!

Thank You-You’re Welcome – Not necessarily a spelling thing, but I do wonder if the Yanks think that Thank You and You’re Welcome is all one phrase. I suspect that they append the slightly high-pitched “you’re welcome” in sheer surprise that someone has genuinely thanked them for something. Sincere manners are not a great trait of the Americans, I have found, though I accept that may well be a sweeping generalisation. Case in point, is the totally insincere and throwaway “have a nice day” that comes with every exit from a shop and every concluded phone call. They never genuinely mean it; it’s just a stock phrase they trot out automatically. But, as my favourite comedian, Jeff Green, once said, he would rather be told to have a nice day by someone that didn’t mean it than be told to sod off by someone who does. 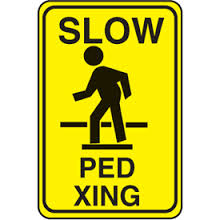 Here in the UK, we know, from a very early age, that a road sign that consists of a horizontal white line on a circular red background is a ‘No Entry’ sign. We don’t need the words “Wrong Way” splashed across it, like the Yanks need, to tell us what it signifies. Similarly, I hope and suppose that all American kids soon learn that Ped Xing is an abbreviation of Pedestrian Crossing.  It took me a while to work that out the first time I saw it. It seems to me to be an abbreviation for abbreviation’s sake. My first guess was that it was the name of a Chinese table tennis player, if I’m perfectly honest.