As those who follow the blog via Facebook might have spotted, I have taken the rather rash step of pledging to take the pledge during January. What started off as throwaway comment, as part of a general desire to regain some fitness after Christmas, has now grown legs and set off running. A number of work mates overheard my half-hearted proposal and said they would like to join me – it falls under the category of calling my bluff, I think.

So, the upshot is we now have one of those JustGiving charity pages with which I am sure you are all familiar these days, and a full-on campaign to raise money for Cancer Research UK is underway. I have received wrist-bands, posters, beer mats and all manner of other promotional material through the post.  I have no intention of pestering people for sponsorship money but anyone who wishes to contribute can do so via the link at the bottom of this page or at our JustGiving site.

There is a healthy dose of scepticism in the Griffin household that I will have the willpower to complete this but I am quietly confident. For a 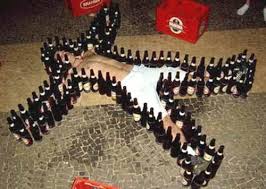 start, it will be nowhere near as big a task as it would have been about ten years ago when my drinking would have given George Best and Oliver Reed a run for their liver.

Watching the Sopranos and Suits on a Friday night without a cold, dry bottle of Frascati will take some getting used to, as will watching Wigan Athletic without the benefit of alcohol; it is hard enough watching them pissed, let alone having to suffer them stone-cold sober. Also, the convivial post-Thursday Night Football re-fuelling session won’t be the same when the Kronenbourg is replaced with a healthy Britvic orange with ice.

Still, it’s only for 31 days and whilst my wallet, my liver and the bathroom scales will be overjoyed, there are certain things that I won’t miss about drinking for a whole month either.

Couch potato – There has been a long standing rule in my house that stipulates that a day session at the football can have one of two end times; 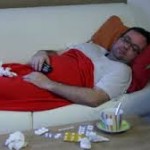 I can choose either to be home by seven o’clock, capable of staying awake through an evening’s tele watching and riveting conversation, or I have to stay out until gone eleven at which point I will arrive home to be met by a sleeping household, a pint of water, two Paracetamol and a duvet and pillow on the couch. I usually opt for option B. I have no issue with sleeping on the couch, but being woken up by two cats the morning after and having to lug the bedding back upstairs with the mother of all hangovers is something I can do without. 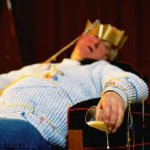 drinking session at the football. As I touched on earlier, I can normally be found on a Friday night supine on the couch complete with headphones and wine. I have managed to get the timing of this off to a fine art, making a bottle of dry white last the precise amount of time it takes to watch two episodes of the Sopranos, or a show of similar duration. Sometimes, however, my drinking lags behind the shows and I am left with twenty or so minute’s worth of dregs. I will watch any old drivel whilst I am draining the remains and, nine times out of ten, will nod off, only to wake up at half two in the morning feeling like shit. And, on eight of those nine times, I will forget to change the channel from Babestation back to BBC News 24, which brings a whole world of pain and embarrassment in the morning.

Train Chasers – The end of a proper session will inevitably involve battling with public and/or private transport companies in order to get home. I 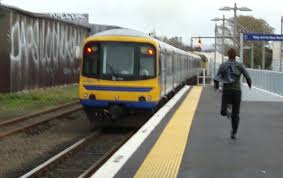 was reminded of this last Friday after our works do in Manchester. I am a veteran of catching the last train back from Manchester or Liverpool, but I haven’t done it for a while. So, whilst I had the train times indelibly imprinted in my brain, my calculation of the time taken to get from Deansgate Locks to Salford Central had not taken account the fact that I appear to have lost a yard of pace over the last twelve months. I therefore managed to squeeze through the train doors with, literally, just seconds to spare. Having sweated, panted and farted my way back to Hindley, I was then at the mercy of the local taxi firm. The odds of securing an early ride home from Hindley depends entirely on your ability to string together a few words of barely comprehensible English and to sweet-talk the old battle-axe in charge of the job sheet.

Sheesh!… Kebabs!  – Whilst waiting for a taxi, or contemplating whether you could actually walk it home, it seems obligatory these days to 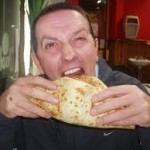 have a kebab while you make your mind up. Why on earth do we do this? You wouldn’t dream of eating one of these things sober but, after eleventeen pints, they are the best idea you have ever had. The morning after, it doesn’t seem to be quite such a brainwave. It lines your stomach – if you’re lucky – and you can still taste it through breakfast, dinner and tea. I used to get one from a shop at the bottom of Ladies Lane every Friday night when pissed. It was fantastic. One day, I left work early and needed something to eat quickly and bought one from there at half three in the afternoon. I thought they were trying to poison me. Perhaps they were.

Play Area Bedlam – Part of my pre-match penance is to entertain Alex for a few hours before I go. The venue of choice is normally an indoor play area. 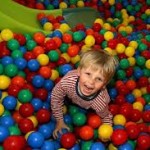 He gets to charge around for a couple of hours and I get to read the paper, sup tea and piss about on Facebook. Mrs Griff gets her feet up at the same time and so we are all happy. Sometimes, we perform this same ritual the morning after a session. I still get to sup tea, stare blankly at the paper and paw at the laptop, but it really is nowhere near as enjoyable as non-hangover visits. The kids’ screaming seems to be far more intense and I swear I can hear their 6-year old stocking-feet pounding up and down the carpet. Plus, I still have last night’s kebab to contend with.