It’s an occupational hazard, but sometimes you have to humour your kids and play the games that they want to play in the name of keeping them entertained in school holidays and during wet weekends.  If you are the father of a daughter this can turn out to be a horrific experience, involving dolls, hair brushes, tea parties and little ponies. If this is your world, then you only have yourself to blame; you should have had a pre-natal clause inserted somewhere that said if it came out metaphorically pink then you reserved the right to swap it for a blue one.

Fortunately, most of the time, my lad just wants to go in the back garden for a quick game of football, or perhaps to play cricket or tennis. And this is fine because, as well as getting a bit of sporty ex 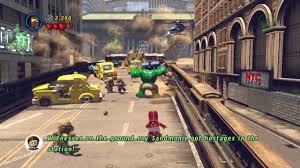 ercise, it is officially considered a chore and therefore excuses you from other, less pleasant, chores like washing up or cleaning bathrooms.

When it does become tedious is when he insists on me taking on the role of Player 2 in one of his dozens of video games for the Wiiu or Xbox. For example, his current favourite request is to ask me to tag along as Spider Man to his Iron Man, Incredible Hulk or some other Lego Marvel Super Hero as he swans about Manhattan zapping anybody and anything in his path. It is mind-numbingly dull.

In the good old days – last year – he would ask me to be Player 2 in a game of Mario Kart. This, I didn’t mind. For one thing, there is a clear purpose to the game, ie to win the race. Secondly, even for a cack-handed old fool like me, the controls are easy to understand and operate.

Yet he would still stitch me up by choosing courses that he knew I couldn’t navigate very well. I find courses like Rainbow Road and Moonview Highway to be impossible to play without perpetually toppling off into the stratosphere in the case of the former, or being continually crushed by oncoming traffic in the latter. And then there is Mario’s Gold Mine, a race track that causes me as much panic as the real life experience of traveling in a tuktuk in downtown Bangalore or Kolkata.

However, there are some courses – easier courses, admittedly – around which I fare much better and have more success. Alex tries his best not to choose these courses for our races but, unsurprisingly, they feature in my five favourite Mario Kart courses:

Snowboard Cross – the beauty of this course is that there are very few places where you can actually fall off. There are two lakes on the course but they are easily avoidable. Other than that, any off-track veering usually just lands you in a pile of heavy, drifted snow and is therefore very easily recoverable.

Delfino Square – With its tight cobbled streets, this course reminds me very much of driving round the streets of Marseille, with the only thing seemingly missing being the ubiquitous and ingrained dog shit. I can only assume that it is the familiarity with my old stomping ground that enables me to win more often than I lose on this track.

Coconut Mall – Anyone who has trudged wearily around the Trafford Centre cannot fail to be impressed with the concept of hurtling round a shopping mall in a car mowing down anything in your path. I believe that years’ of racing round Asda with Alex in a shopping trolley has stood me in good stead for this course. 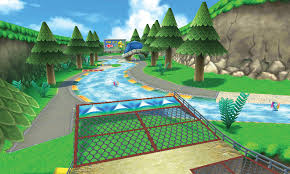 Waluigi Stadium – There are golfers who have an affinity with a particular golf course and always seem to perform well there regardless of their current form. I am much the same in my relationship with Waluigi Stadium. I have found a way to negotiate its mud flats and dragon pipes and my course management is second to none. Well, second to none in our house, at least. Although sometimes I do come second to Alex.

Koopa Cave – This is by no means the easiest of all the Mario Kart tracks but, again, I seem to have stumbled a cross a winning formula. I particularly enjoy the slightly bizarre concept of driving around hillside roads and paths before careering into the raging river and then descending into an underwater tunnel. It always reminds of the lady who was out in the family car and rang her husband to inform him that there was water in the carburettor. Impressed with her mechanical knowledge he asked her how she knew that. “Because I’ve driven it into the canal”, was her matter of fact response.

See you on the starting grid!