This week, and this is by no means an uncommon occurrence, I have been having a lively, reasonably good-natured fall out with some of my fellow Wigan Athletic fans on various social media and on the Latics’ message boards.  The world of the message boards in particular is a very strange place to be.  To a large extent, it is populated by aggressive, anonymous adolescents who wouldn’t say boo to a goose in the real world. Others are trolls, who are simply on a mission to wind up as many posters as they can. And finally, sadly, there are simply people who just post utter d 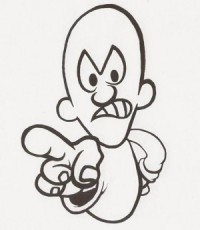 rivel and then, when picked up on it, pretend that they never really meant what they’d written and were just fishing for a bite all along.

To be fair, this week in cyber space hasn’t been too much different from any other. Unsurprisingly, I have had the odd word to say on most subjects that were up for discussion. Again, unsurprisingly, many of my comments are riddled with sarcasm and sprinkled with mildly invective language. I am often accused of “…being brave, whilst hiding behind a keyboard”.  This, despite the fact that my User Id is my real name and my avatar happens to be a picture of me (and Jordi Gomez). My previous User Id even had my stadium season ticket seat number (V103) appended to it in case someone developed a burning desire to come along to pursue a more meaningful discussion with me. Hiding? Hiding in plain sight, I think they call that. Not exactly the antics of your typical keyboard warrior, I think you’d have to agree!

But I digress, slightly. Not like me, I know. There a have been a number Wigan Athletic fan-related topics that have tested my blood pressure in cyber pace this week. So, rather than fall out with everybody, and waste hours in the process, I will vent my spleen here, safe in the knowledge that it won’t cause too much of an argument as very few people are sufficiently arsed to even read this blog.

Time to go! – I suppose, having paid for your match ticket, you are entitled to leave the stadium whenever you like, particularly if you 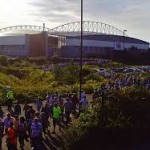 aren’t enjoying what you are seeing. I once tried to do this at half-time at a Crewe\Wigan match many years ago and accused the copper who made me stay for the second half of breaching my civil liberties by “forcing me to watch this shite” (ultimately, he agreed and let us leave twenty minutes before the end). However, why do so many people, particularly at Wigan it seems, have to leave so early and disturb me as they push their way along the row in the process? Leaving twenty minutes before the end to got to work, or on holiday or to get married is one thing, but leaving with just five minutes left? What’s the point of that? What is so acutely pressing that it can’t wait five minutes longer? There is even a formal phrase for this phenomenon now – the Wigan Walk – which used to be attributed to the town’s rugby fans but I think is becoming just as appropriate for us Wendyball* fans.

Twisted lyrics – I’m sure that most of you who get anywhere near my Facebook feed will be acutely aware that Wigan won the FA Cup last season. I have mentioned it a couple of times. We are therefore the current FA Cup holders on account of us being FA Cup winners last season. I fully applaud the Wigan fans joyously and repeatedly chanting that “We know what we are” song… but they sing that we are “…FA Cup champions”!! Now you can argue with me until the cows come home whether it is technically correct to use the phrase champions or not but, as far as I am concerned,  Wigan’s fans are the only ones in history to ever refer to themselves  as FA Cup ‘champions’ as opposed to ‘winners’ or ‘holders’. In support of my belief that they are wrong, I offer the evidence that they even sing the wrong words to the club’s very own signature song, “You Are My Sunshine”. No further questions, your witness!

Boo-boys – I’ve ranted about people – supposedly grown men, no less – booing at Wigan matches before, but there has been a new twist to it this week.  So, again, I suppose having paid their entry fee, the booers (spelling?) will argue that they are entitled to express their views in whatever manner they wish. And I have 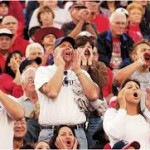 to say, if they are booing the opposition in the however misguided hope that it may actually put a professional footballer off his stride, then that is one thing. It is quite another to boo your own players, a fate that has befallen Jordi Gomez for the best part of the last two and half years. What did they think this will achieve? It certainly wouldn’t encourage a hardened manager to substitute him, which is what they really wanted to happen, and it definitely wouldn’t make the lad himself play any better. Would you? But, guess what? The lad is now playing as well as he has ever played and suddenly the boo-boys are saying they knew he was a belter, all along! Fickle? Oh, just a little bit, yes! If I were Jordi, I would be working on a goal celebration that involved me visiting all four sides of the ground delivering a resounding “Up yours!” in my best Lower Ince accent together with middle-finger salute.

Childish names – Are you still wondering about the Wendyball comment earlier? Wendyball is the side-splittingly hilarious name that the town’s rugby fans call football, because it is of course, a game played by girls (no offence, sisters) not real men, like wot rugby league is. Actually, I think it’s quite an amusing name, if I’m honest. It’s certainly cleverer than the football fans’ riposte, which is to cunningly call rugby “thugby”. Gettit? And the Stephen Fry-type wit of the Wigan football fan on our forums doesn’t end there.  For example, I find it incredible that some men – again, supposedly adult men – refer to some of the country’s football teams as Dullham, Blunderland and Wet Spam. It is toe-curlingly embarrassing. But, of course, when pulled up about it they will say they are only doing it to be funny and because it “winds up people like you”. Yep, you’re right. It does.  But it’s really the former, isn’t it pal? And it really isn’t funny.

Marketing Gurus – I have lost count this week of how many people know someone personally who works at our club and, more specifically, in the ticket office. That ticket office must employ about four hundred people. And every one of these “In The Know” people this week seems to have picked up some spurious ‘fact’ about the current volume of FA Cup semi-final ticket sales, then stated that the club is deliberately misinforming fans about the volume sold and demanded to be told the truth. Demanded? Really? Why on earth does the club have to tell you anything at all?  “The club doesn’t even want to sell the tickets to us” was the most bizarre claim I read all week, and there were some good contenders. Yes, because that’s exactly how Dave Whelan made all those millions, by not shifting things on that he has for sale.  “Everybody in that ticket office should be sacked, they know f*** all about marketing.” Er, well a) they aren’t a Marketing team, they just sell tickets and b) they aren’t even Wigan Athletic’s staff to sack! I’d sack half of our supporters, if I had my way. We’d be better off if they all buggered off down the M55 and started supporting Cesspool. And take that Jordi Gomez with you. He’s shit.

There, that should cause a couple of indignant coronaries amongst the old Brains Trust this morning.