I don’t know why, but I’ve never really considered Easter to be a holiday time like Christmas.  Maybe it’s because it always falls on different dates but it is pretty clear that it is considered to be very much like Christmas these days, albeit Christmas’s little brother. Asda and Tesco shut for one day and everyone panics buys like Doomsday’s approaching, for example.

A lot of people go away to take advantage of the extended time off. France and Italy for skiing and Wales to freeze your balls off on a pebbly beach appear to be amongst the more popular destinations these days. Other people stay at home and maybe walk up to Rivington on Good Friday – well, only if you live in the immediate vicinity. I wouldn’t expect non-North Westerners to attempt it.

Me, well I have my own Easter routine, too. There are usually two Wigan Athletic football matches to go to and, I jet-wash the patio. Yep, every year it now seems, I 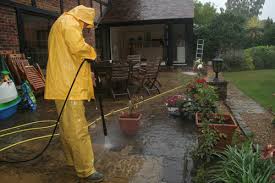 spend at least half a day washing away the shit and debris that has accumulated since last Easter. I have probably done it for the last seven years on the spin now. So, you would think, by now, that I would have the whole thing off pat and that nothing to do with this entire operation would surprise me anymore. Well, you’d be surprised.

See you in the garden – Griff