Here’s a 5-4-Friday with a bit of a difference this week.

As many of you will know, I recently ran a Prediction competition for the World Cup in Brazil. It is starting to become but a distant memory, but we made a great effort in raising almost £150 for Joseph’s Goal.

It is just as well that we were collectively good at raising money for charity because we weren’t too good at predicting football results. Still, I think we all had a good time, and news of our exploits even made it to the top offices of international government. Take a look at the video here.

As this is Friday, however, here are five things that stick in my mind from the four-week tournament. From a Prediction League viewpoint, that is.

Odds – Generally speaking, women don’t understand sporting odds. That’s not being sexist and I am not being critical. It’s just a fact. Men don’t really get housework, and I’m not having a pop at them, so what’s the difference? See, not remotely sexist. I attempted to explain the concept of long odds to a girl at work who immediately plumped for Costa Rica at 8-1 to beat Uruguay purely because she understood that “the bigger the number, the better”. I shook my head and left her to it, as she clearly didn’t understand. She finished 4th, I finished 25th. So what do I know?

Studying form – … is clearly an over-rated pastime. The girl I mentioned above who finished 4th made her predictions based on how much she liked the colour of the teams’ shirts or whether she thought they were a nation of nice people (bizarrely, she went for Germany on that basis, too). One bloke just filled the boxes with “home, away, home, away” regardless of which two teams were playing. Despite this, at the end of the first phase he was sat proudly at the top of the pile. The girl in questions, as I said earlier, ended up in 3rd place overall.

Awkward – If you ever need people to provide you with information in a specific format, ask them to do it in the exact opposite manner to the one you require. That way, you can be certain of getting what you need. In the early rounds, I asked people to compete a s 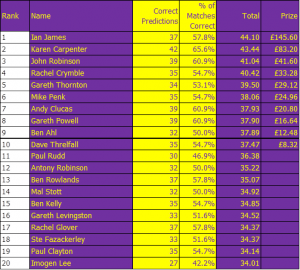 preadsheet form and received a variety of responses by text, voicemail, on the back of a fag packet or scrawled on a piece of bog-roll. In the latter stages, when the number of matches to predict diminished – down to just two – I was happy to receive predictions in the form of two letters. I ended up with spreadsheets coming out of my ears.

In it to win it – Given that we often criticise this country’s sportsmen (and women) for lacking that killer instinct to see a bit of competitive spirit in play with the Prediction League. Here at Guinness, for example, there was an interesting side bet between two guys in the team. The stakes were eye-wateringly high – a KFC bucket to the one who finished highest (I don’t think the loser has coughed up yet, by the way). It was also obvious as we progressed through the tournament that there was a direct correlation between current league position and the thought given to the remaining predictions. Those that had no chance simply didn’t bother, those in the money were among the first to respond.

Good people – Finally – and at the risk of sounding serious for he first time in the almost two years of this weekly blog – in this generally selfish world we inhabit, it was extremely refreshing to have people willingly and unquestioningly donate part of their entry free to such a worthwhile charity as Joseph’s Goal. What was even more impressive was that a few of the Top Ten finishers also donated some, or all of their winnings, to their charity. Heroic, and something that makes all the effort worthwhile. 2016 anyone?

See you at the Euros – Griff