A few weeks ago, I was pleasantly surprised to find that our work canteen stocked some proper old skool pop in its fridge. 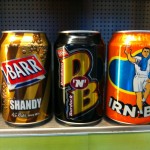 There were tins of Irn Bru, Barrs’s Shandy and Dandelion and Burdock, stuff I haven’t seen on shop shelves since I was a kid. All they were short of was Tizer and I can only assume they were just temporarily out of stock of that. I cannot believe you would carry those other three lines but then not bother to sell Tizer.

But wait, as if this wasn’t good enough, last Friday a lady came into the office and set up a stall selling old skool sweets, too. I say “sweets”, though I have always referred to sweets as “toffees” even though I am regularly corrected and told that toffee is just a kind of chewy sweet. So, I will reluctantly talk here about sweets even though, as a Wiganer, we always called them toffees, chewy or not. It is in much the same way that we talk about dinner and tea, rather than lunch and dinner. 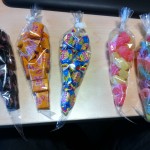 Anyway, I digress. The lady had all sorts (yes, even liquorice allsorts) of sweets/toffees in bags, all for sale at the princely sum of £1 per bag. She was selling some stuff that I think you can still buy in regular shops and supermarkets today, but others that I thought had been consigned to confectionary oblivion. She had Black Jacks, Fruit Salads, Anglo Bubbly (remember those?) Cola Bottles, Love Hearts, Pear Drops, Wine Gums, Fruit Gums, Midget Gems, Sugar Dummies, Gobstoppers and a whole plethora of other types and brands, too. Despite that, a number of my favourites were missing from her trestle table. 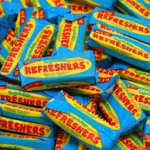 what I am going to do here. I have to confess that the lady did have Refreshers for sale. However, I wanted to include them here in my top 5 as they are my favourite sweets (toffees) of all time. It never really mattered to me whether you got a soft, chewy one or a rock hard “snap your teeth” one. That sugary, sherberty rush you felt when you bit into it was exactly the same, whether soft or hard. These days, I would probably be better off with the softer ones as these old gnashers of mine have seen much better times.

Pacers – I’m sure everyone remembers Opal Fruits (or Starburst, as they are 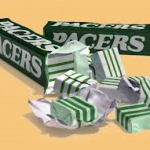 called now; why change the name? And, while we’re at it, what was wrong with Marathon, why did it have to change to Snickers?) and I guess that most will also remember the similar Chewits. I’m not sure everyone will remember Pacers, though. They were all from the same family, a kind of chewy cuboid, the only difference being that the contents of a Pacers tube were all the same colour – white – and flavour – spearmint, or peppermint. The packaging was green and white stripes which meant that anybody dressed in green and white was invariably – and dare I say hilariously – dubbed a ‘Pacer’. Like Glasgow Celtic fans, for example, though I’m sure they have been called much worse.

Swizzles – If they had been white, Swizzles would have looked like a headache table. But they weren’t. 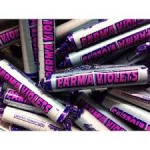 They were multi-coloured and, I think, multi-flavoured. I never really saw the point of them. They hardly touched the sides. You could get even get a Swizzles necklace which is a completely different thing to, and nowhere near as much fun as, a pearl necklace. As with Chewits/Opal Fruits/Pacers, there were variations on the Swizzle. For example, Love Hearts were nothing but a big Swizzle in reality. The most hideous of the genre for me was the Parma Violet. They were awful. Why would anyone, faced with a choice between Swizzles and Parma Violets, forego a multi-coloured selection of tasty flavours in favour of a bland lilac coloured alternative that tasted of dental surgeries? It is beyond me! 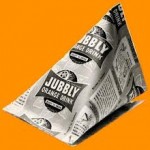 If we are talking about choices, and I believe we were, then who in their right mind would choose a common or garden ice-pop over a humungous Jubbly? A Jubbly was a flavoured ice pyramid about three inches in both height and diameter that came in a cardboard carton (Diameter? That’s not right, how do you express the bulk of a pyramid? Volume, maybe?). You would open the top (apex?) of the frozen pyramid and suck away (see pearl necklace reference earlier), gradually pushing up more of the iceberg through the opening at the top. There was a shop at the corner of Hollins Road and Long Lane called Reeves’s – many thanks to the residents of Facebook and Hindley Green this week for your help recalling the name of the owners of the shop – that used to sell particularly good examples. Sadly, neither the shop nor Jubblies seem to still be in vogue.

Twix and a 99 – Yes, yes, I know these are two completely separate items and so you might reasonably ask 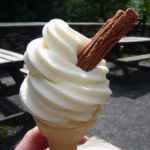 why they would be paired together here. Especially, as the 99 ice cream already came with a flake as an integral ingredient, so why the chocolate? I also know that both are still in plentiful supply on our shop shelves. The answer is related to school dinner tickets, and please note the word dinner, rather than the word lunch. When I was at High School (another Americanism, we always called it big school or secondary school) you bought tickets at the start of the week to be spent in the dinner hall – no, we didn’t call it the dining hall. I would sell mine to fat kids so that they could buy themselves two lots of fish, chips and mushy peas. I, on the other hand, would take my cash to the ice-cream van in the playground and buy myself a Twix and a 99. A couple of times a week, I would break this routine to visit Sara Lynn’s pie shop and buy a meat and potato pie and a buttered barm cake instead. My body is, and always has been, a temple.