“Hey Dad, which TV advert is this song from?” asked Alex, as we hurtled down the M53 towards Chester last Saturday. I struggled to answer the question on two separate counts.

Firstly, we were listening to Capital FM which, to the best of my knowledge, rarely plays any Paul Weller, Val Doonican or Northern Soul. Therefore, it may well have been possible that I had heard some of the tunes being played before, but I couldn’t tell you what they were called nor name the artists.

And secondly, when do I ever watch adverts on television these days?  The only thing that I tend to watch ‘live’ is sport, predominantly on Sky. 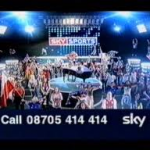 Ad  breaks in Sky’s live football, cricket or golf tend to contain multiple, bland, simple, one-line endorsements of the company or brand that is sponsoring that particular broadcast, like Ford, Titliest or some insurance or price comparison company. Either way, I usually go for a pee while they are being aired and therefore don’t watch them.

Ninety-nine per cent of everything else I watch has been pre-recorded on our Sky Plus planner and I therefore have the choice to not watch the adverts at all, a right which I exercise at every given opportunity.  So, unless the advertisers planned for me to watch their creative masterpieces at “x30” speed they have wasted their untold millions, certainly with respect to the senior male element of this particular Griffin household.

Aside from the fact that I can, and consequently do, fast-forward though the ads, 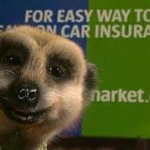 nothing I have seen of today’s offerings would make me want to pause and watch them anyway. They are all so dull these days. I accept that those meerkat adverts can be quite amusing at times, but it seems that the big corporations just want to throw squillions of dollars at so-called A-List celebrities like David Beckham and Eva Longoria. Probably, they no doubt believe, because they’re worth it – see what I did there?

Back in the day, however, before our society became totally obsessed with celebrity culture, advertisers had to be a bit more creative and come up with something that would capture our imaginations. I bet you can sit there right now and, without even trying, rattle off four of five commercials or advertising campaigns that have stayed with you since your youth, maintaining an impact in some cases long beyond the shelf-life of the products they originally promoted.

Many ad campaigns in those good old days had an ongoing storyline or a recurring theme which often left you desperate (oh, OK then, mildly interested) to see the next one. For example, there was Maureen 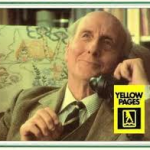 Lipman’s BT ads – “ooh, he’s got an ology” – and the “will they, won’t they, did they?” saga of the Gold Blend couple. The Nicole/Papa ads for Renault were a little bit wearing but at least you remember them, and a resounding “hats off” must go to the people behind the Yellow Pages campaign that made a book on Fly Fishing by J R Hartley into the most famous book never written!

Before celebrities held sway with the vast majority of our star-struck consumers, the stars of some of the best campaigns were frequently animals. By way of evidence, cast your minds back to the Duracell rabbits, the Andrex puppies, the Dulux dog and the Whisker’s nine out of ten cats – yes kids, that’s where the title came from for that Jimmy Carr panel show.

The best animal adverts of all though, in my opinion, were those starring the PG Tips chimpanzees, and 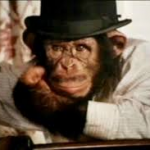 this is the first of my five most memorable TV adverts of all time.  As usual, feel free to disagree or add your own. I’m sure they will be different from mine, there are so many to choose from. And, as my granny used to say, “It’d be a pretty boring world if we all thought the same”, would it not?

PG Tips – Given the madness of today’s politically correct world, advertisers probably wouldn’t even get away with dressing up chimpanzees and forcing them to act, let alone squashing one under a full-size piano shoved down a flight of stairs. “You hum it son, I’ll play it.” Watch now

R White’s Lemonade – I don’t know whether it was deliberate to choose an actor who was the spit of Hank Marvin but this advert always tickled me and still does. I still sing it now, thirty years on, whenever (if ever) I take a bottle of lemonade out of the fridge. Or even tonic water, which is a much more regular occurrence. I bet that would rile the commercial guy at Schweppes. Watch now

Smash Mash Potatoes –Alex saw this advert recently and had a good old giggle. Not so much at the humour in the ad, more at the antwacky nature of the Martian characters. I suppose that is entirely understandable when you’ve been brought up in the Avatar and George Lucas age in which the technology is ever so slightly better than what they had at their disposal back in the seventies. Watch now

Carling Black Label – Comedians Steve Frost and Mark Arden starred in a series of ads for Carling Black Label in which people performed various heroic and/or astounding acts which ended up with either Frost or Arden commenting “I bet he drinks Carling Black Label”. Arguably, the most famous of the series is the Dambusters parody in which a German sentry performs goalkeeping heroics on the dam to thwart the RAF’s bouncing bomb raid. Watch now

Hamlet – Another long-running series of adverts was for Hamlet cigars featuring scenes in which the subject would become more and more frustrated in his attempts to do whatever it was that he was doing. Ultimately, he would simply give up and light up a Hamlet cigar and smoke it to the soothing tones of Bach’s Air on a G String. There were many examples, probably the most memorable of which is this one – the bad hair day in the photo booth. Watch now

A few years ago, a company called Thinkbox produced a TV advert designed to demonstrate the power of… TV advertising! It contains a nod towards some other classic ads as well as a couple of the above. Watch now