We all know that the game of football is littered with clichés and hackneyed phrases. Commentators, managers, pundits and especially players resort to using these same phrases at the drop of a hat – oops! – rather than dreaming up something original to say. Perhaps they are just lazy, a little scared to stick out their necks to say something different to a global audience or just too thick to think up anything new.

England played San Marino tonight and a pundit previewing the game actually said “there are no easy games at international level .” It’s San Marino, ranked 207th, and last, in the world. By definition, it cannot get any easier. Technically, it could be just as easy had the opposition been Bhutan or Turks and Caicos, as they are ranked joint 207th along with San Marino, but it literally could not be easier. On paper, anyway. That’s another one, “on paper”. Why do people say that? “On paper, this will be an easy game” they say, for example. But they’re playing on grass, which is an entirely different proposition to playing on paper. Not that they ever do play on paper.

There are other well-worn and not so well thought out phrases that simply don’t even stand up to literal scrutiny. Building up to a crescendo is one that really pisses me off. 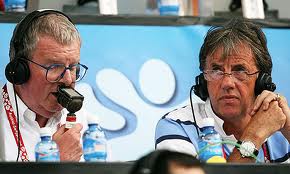 The crescendo is the actual building up of the noise, not the end product of the building up, if you see what I mean. A minor point, but it does get right on my nerves.

“He has an educated left foot” is another bizarre phrase that football people use on a regular basis. What, did it go to Eton or Oxbridge and get a first class honours in physics while its poor relation right foot failed its eleven plus and ended up at the local comprehensive with me? Sometimes, perhaps for a bit of variety, the word educated is switched with cultured. Maybe the left foot in question is a regular at the theatre or reads the classics at bedtime or is a lover of fine wines.

Then, there are the phrases that commentators should really think about carefully before uttering out loud. I recall Dion Dublin once playing at Old Trafford and the commentator remarking that the ball was “knocked long to Dublin”. Well quite, about 160 miles, in fact. In another game, Ryan Giggs was seen to “hit the ball into space”. Now that may not be a particularly educated or cultured left foot but it is certainly a powerful one to reach all that way. I thought Dublin was far enough. Whilst I’m at it, “he has come inside the full-back” is a phrase that should simply be outlawed. Enough said.

Private Eye has a long-running feature called Commentator-Balls in which they highlight literal and grammatical cock-ups made by commentators and writers. There are – quite literally – hundreds of these if you care to look them up but I heard one of my favourites just last week when a Talksport commentator speaking of Norwich City’s chances of salvaging anything from their game at Chelsea said this: “Norwich need a miracle or divine intervention”.

God give me strength!